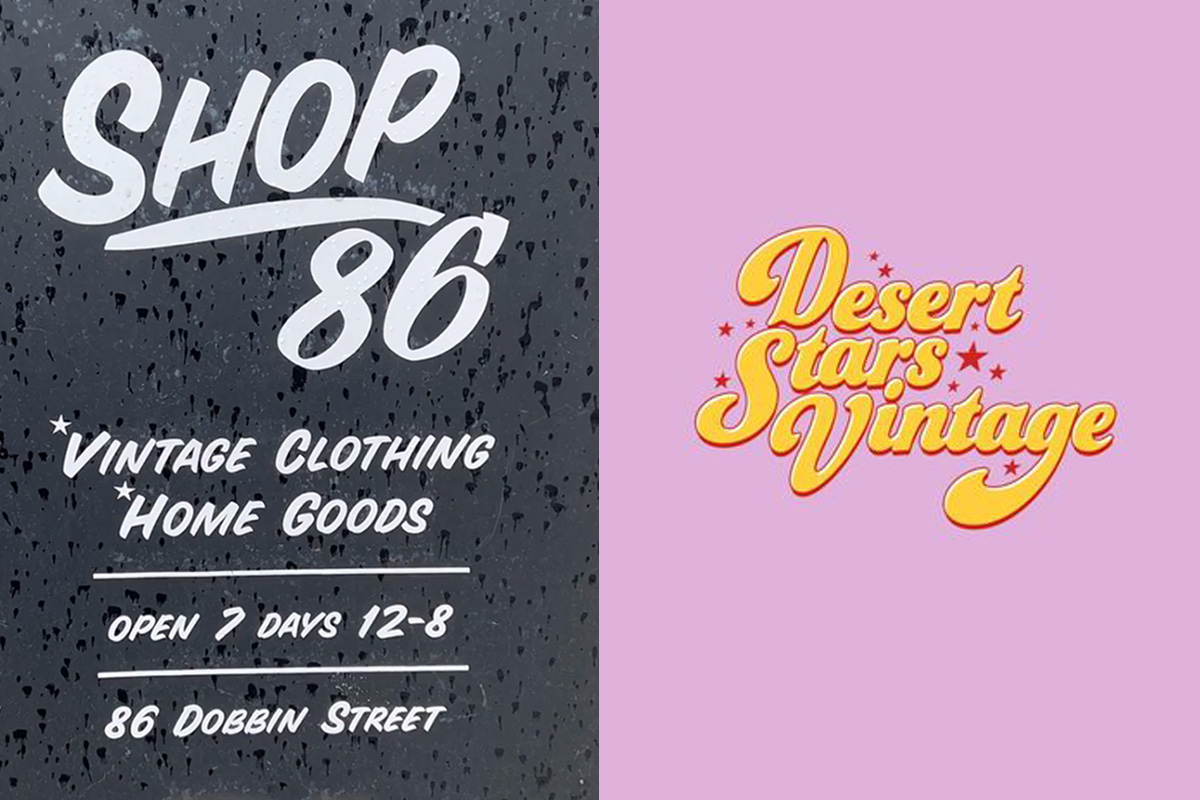 Brooklyn’s best vintage destination is helping the environment while serving up unique looks.

Wearing vintage has always been the garb of choice for creative, cool youth. Look at how the girl group, The GTO’s glammed it up with 40’s era velvet dresses in the Sixties. Miss Christine and Miss Mercy of the group famously styled Alice Cooper giving him a stage ready costume and enhancing his alter ego by applying eyeliner. Miss Pamela Des Barres would go on to say in her book, Silk, Satin & Velvet: The Secret History of Groupie Chic, that the band wore vintage (which they cut and sewed together making the pieces their own) not just to express their individuality but also out of necessity: they were from lower middle class families.

In the 1980’s, Cindi Lauper mixed ’40s vintage with ’80s brightly colored punk heels and accessories. People threw rocks at her for her zany fashion sense until she had a hit song. Then those same people started dressing exactly like her and it made her sick. Many artists are celebrating the glamour of older fashions. After all, it’s literally like stepping into a past life. The fantasy of what the original owner had experienced can be truly exciting. At the 2022 Grammy Awards, Dua Lipa wore a sexy, vintage ’92 Versace bondage dress. Wearing vintage keeps the landfills cleaner and almost guarantees uniqueness. Both of these reasons are why Rhianna’s stylists shop almost exclusively for vintage.

I personally trolled a second hand shop called Savers as a teen because I could only afford to buy shirts for a quarter. I would buy ’70s men’s slacks and wear them to school. Luckily for me, the bellbottomed look of the late Sixties and Seventies was en vogue during the 1990’s. I even bought a Minnie Mouse costume for a dollar and wore it as a dress. The red polka dots were very punk in my opinion. I would accessorize it with layered pink and white fishnets followed by my trusty Doc Marten’s boots. I felt like the queen of my own kingdom. While every other teen in Southern California would be wearing Hurley and Quicksilver shirts, I was in a league of my own. I was cocky and cool even while the seniors were throwing Big Gulp sodas at me on my walk home from school. I think they were just jealous that I had the confidence to be so bold.

I met my friend Janelle Best in our neighborhood of Williamsburg, Brooklyn fourteen years ago. She is one of the most creative people I have ever encountered. She is the head curator and vintage seller at Shop 86 in Greenpoint, Brooklyn. Most clothing stores have a slow start when they first open but this store has been consistently popular since day one. There are eight different vintage sellers and three home goods sellers in store which make this a diverse, one stop shop. 40K or Less is the brain child of vintage purist Natasha Ruiz. Of An Era are rave culture and 90’s pieces by Greta Prell. Owen Lindquist of Owls Oddities and Pete Papadakis of Picked By Pete specialize in workwear and vintage t-shirts. Gretchen H. works under the name Gretch Betch and finds a lot of Y2K and designer pieces. Jess Parsons brings in Y2K accessories such as handbags under the name Love Letter Mag. Allison Miller was a stylist for ten years. She worked with Amy Winehouse back in the day and goes under the name Menthol Gold. Anthony Patti is the brains behind Shop 86 as well as all the stores on the block which he leased and renovated when it was no mans land on that block. He sells these amazing vintage quirky clocks and rugs sourced from Brimfields. Elan Hall hand makes colorful rugs and Cheyenne Timperio makes these beautiful dream catchers. Lastly, Janelle Best goes under the name Desert Stars Vintage. She specializes in vintage and second hand top designers. If you are looking for a Gucci or Saint Laurent blouse – she’s your gal.

Janelle started sourcing clothing from second hand stores as a teen in 1992 in her hometown of Macon, Georgia. She started wearing her dad’s oversized seventies clothes so her dad Chuck suggested they go thrifting to find her smaller items. Her mother wanted her to dress like a princess not a stoner so she was very against this change of pace. Janelle was a rare gem in her town and felt the calling to move to NYC in 2003. She started a band called Desert Stars and later had her own clothing line of the same name. She began selling vintage on the street in front of her apartment in 2014. It was the perfect area steps away from the Lorimer L train exit. Her friend Greta Prell did sales with her and it became a lucritive operation which let her quit bartending. The operation eventually moved to Shop 86 where it continues to thrive. While Janelle was selling at the most recent Manhattan Vintage Show, she met and sold pieces to legendary designer, Patricia Fields. I spoke to Janelle shortly about what led to her success, the dreaded fast fashion trend and her spirit animal, Pat. 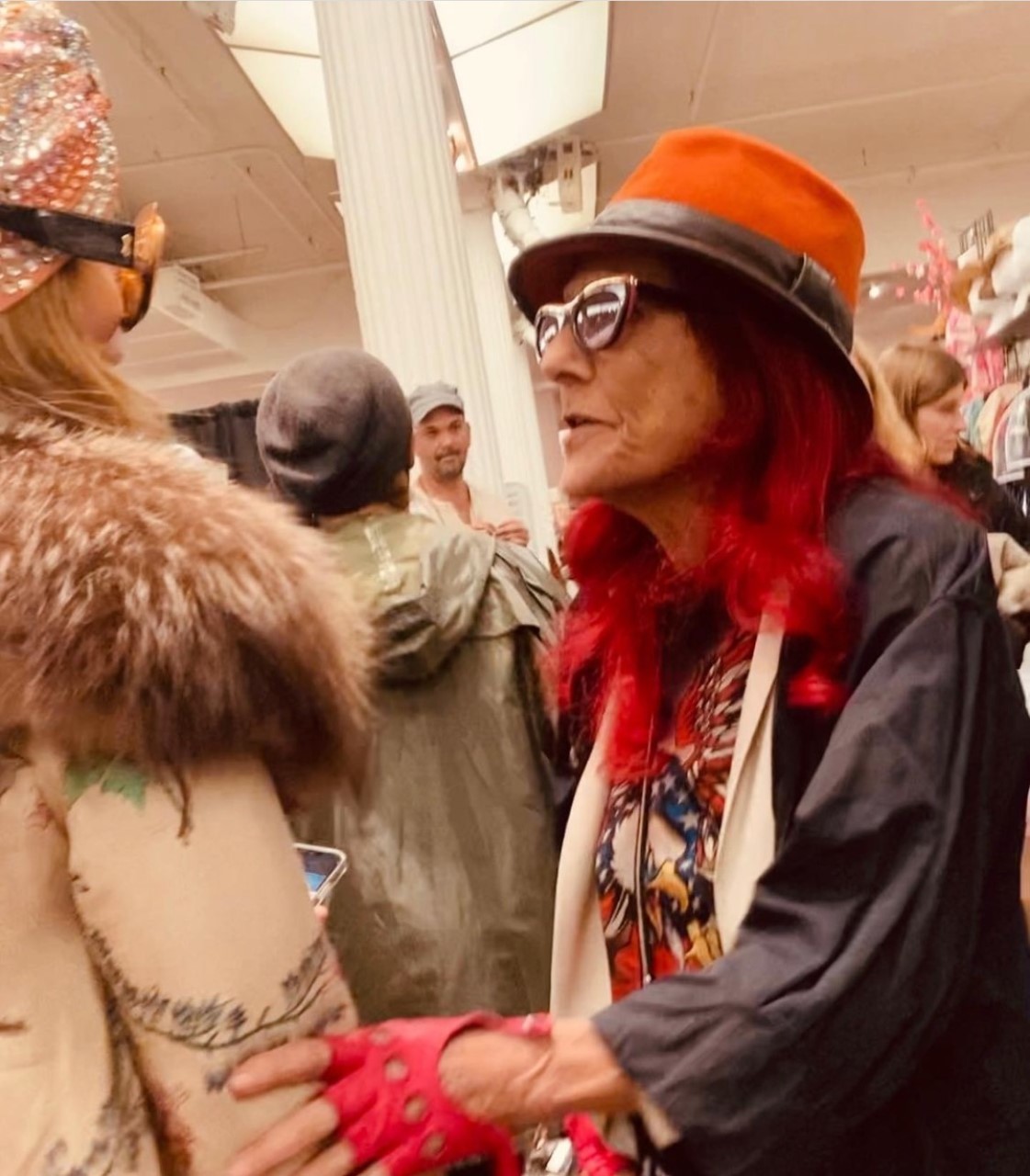 Amy: What were your main fashion influences growing up?

Janelle: There was a fashion tv show on VH1 with Issac Mizrahi as the host. They would do runway shows by designers like Todd Oldham. In Macon, Georgia this was my only access to the fashion world.

Amy: How about magazines?

Janelle: I loved Sassy Magazine. It was the cool kids magazine for teens. I would thrift to emmulate what I saw on TV. I eventually went to an art school and moved to New York.

Amy: What was your focus in art school?

Janelle: Mixed media. I got kicked out.

Janelle: For being a fuck up! Ha ha ha!!

Janelle: So I transferred to Arts management at another school. I’d played music since I was five years old. I partied my dick off and had to get sober. Since I had been thrifting my whole life, I had the idea to sell vintage in front of my apartment. I’ve lived there for nearly twenty years so I figured nobody would fuck with me. My friend Greta who I’ve known for twelve years sold with me on my stoop. We buy from estate sales, buyouts, thrifting and from stylists. We ended up meeting the best group of people who all did the same thing. I met Anthony Patti who renovated all these buildings on Dobbin Street. The stores became open during the pandemic lockdown. Then I started Shop 86 which is on 86 Dobbin Street in Greenpoint with all these talented friends.

Amy: What would you say is the general theme of Shop 86?

Amy: Tell me about why you hate fast fashion?

Janelle: Vintage works in twenty year cycles. So right now it’s Y2K – late nineties/ early 2000’s. The crisis is the next cycle is fast fashion. Massive production from China. Fast fashion is made from un-biodegradable materials and bad for the landfills. The era of Forever 21, Zara, and H&M is coming up. It makes our job even harder to find the quality pieces made from natural fibers. We try to source pieces that are manufactured in France, Japan, U.S.A. and Italy because they send the test of time and really well made.

Amy: Tell me about your assistant Elza?

Janelle: Elza was a shopper here and I scooped her up. She is young and knows what’s cool so she helps me pick clothes. Elza makes her own clothes as well under the name, Mej. Why don’t you tell her about your work Elza?

Elza: I started up cycling. I make tops, pants and cool sleeves. I take classes now under this famous drag queen named, On Ya Knees. I’m working on my finishings so that I can put out really good quality products.

Amy: Very cool. Janelle, tell me a bit about your clothing line?

Janelle: I used to have a line in 2019. I was obsessed with this amazing ’70s jumpsuit I owned. So I got a technical designer to replicate it. I made the jumpsuits in funky fabrics and these O-ring pull zippers. I started with small batches and then slowly made more but it was really expensive to produce. I met this woman named Tara and she told me she wanted one of my pieces forever and finally found one at Beacon’s Closet. I asked her how much they sold it for and she said it was expensive which made me happy. I told Tara that I didn’t even have one of my old pieces. The next week she gave me my piece back. It was the nicest thing anyone has ever done for me.

Amy: Tell me about your experience selling at the Manhattan Vintage Show?

Janelle: At the Manhattan Vintage Show, they were filming Patricia Field’s documentary. The producer ran up to me and said, “I know you have a Patricia Field X David Dalrymple piece. Why don’t you show it to her?” So I showed her the piece and asked if she remembered it and she said, “Hell yeah!” Patricia asked me how much it was and I said, “How about I give it back to mom.” Because someone did that for me. She told me that she too never kept anything from the past. I told her about my experience being gifted my own piece. It was a ‘pay it forward’ moment. She was really cool. She was wearing fingerless gloves and chain smokes. She’s been designing since the Sixties. I’ve always looked up to her. I call her my spirit animal. She bought a few Todd Oldham pieces from me. I wasn’t going to sell those ones to just anybody. I get attached sometimes to my rare finds. So I was happy they found a perfect home. I’ve lived in NYC for twenty years and have met a million people but she was easily the coolest person I’d ever met.