Skip to content
Home » Archive » THIS IS THE CITY:  THE POETRY OF DRAGNET 1967

THIS IS THE CITY:  THE POETRY OF DRAGNET 1967

Joe Friday was a fictional Los Angeles police detective, created and portrayed by Jack Webb, on radio in 1949, on television and screen in the 1950s, and revived as an NBC television series in 1967. The deadpan, dedicated detective sergeant, upholding law and order against the threat of thieves, scam artists, killers – and, in 1967, drug-pushing hippies — was a square, and the series propaganda for the LAPD. But Jack Webb was, at heart, a jazz hipster. He was Pete Kelly from the jazz crime film, Pete Kelly’s Blues. He had a collection of more than six thousand jazz albums. He was married to Julie London, and jazz was their bond. [1] With that in mind, it’s not so hard to picture Joe Friday winding down after a shift by digging Art Pepper at Shelly’s Manne-Hole on Cahuenga Boulevard, or stopping in at Donte’s on Lankershim to catch a set by the Pete Jolly Trio.

Jack Webb was also a jazz poet, a Hollywood Ferlinghetti who in 1958, a decade before William Shatner, recorded, with Billy May, a jazz album — standards, whose lyrics he recited. [2] And there’s poetry in Dragnet 1967. Jack Webb as Joe Friday narrates each episode, always beginning over an aerial shot of downtown or the skyline of Los Angeles with the words: “This is the City. Los Angeles, California (pronounced ‘Californ-ee-ya’).” A bright, Chamber of Commerce description of some positive aspects of the city follows, but in the course of a few lines suddenly turns dark, leading to the words “I carry a badge.” Eleven writers, including Webb, were credited for that 1967 season of Dragnet. Looking through the seventeen episodes, fifty-five years later, it still describes my city today: the poetry of Dragnet 1967: 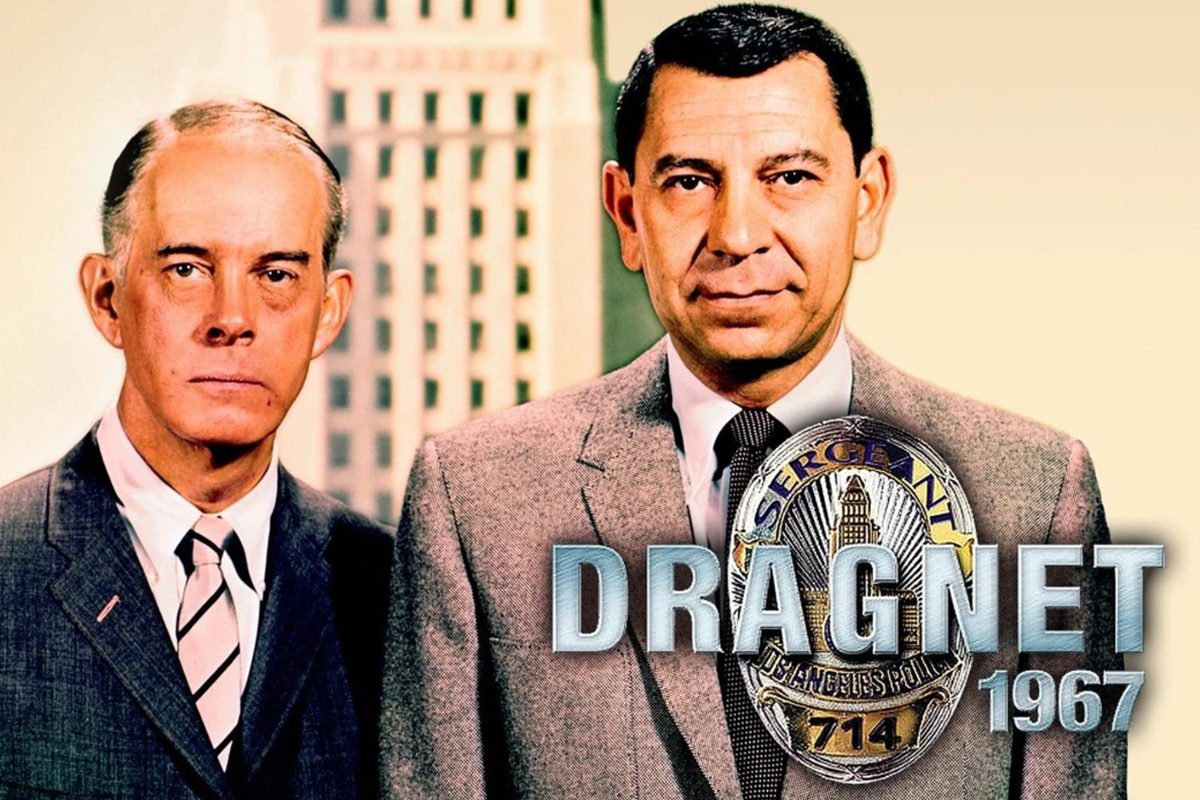 This is the city. Los Angeles, California.
Geographically, the biggest in the world and still growing.
Every day, the population increases by almost a thousand.
It begins to get crowded.
Three million people were here ahead of them.
There are all kinds. The young. And the old.
Those who love. And those who hate.
They’re the kind who make work for me. [3]

This is the city. Los Angeles, California.
It’s a city on wheels, constantly on the move.
There are three and a half million cars in Los Angeles.
Over a hundred and thirty-two miles of freeways.
The maximum speed limit is sixty-five miles an hour.
This is Central Receiving Hospital.
On an average day there are a hundred and sixty-one accidents.
Every month thirty-seven people die.
It’s a high price to pay to get somewhere in a hurry.
Especially when they never get there.
This is where their cars end up. [image of a junkyard]
What’s left of ’em.
This is where the victims end up. [image of a cemetery]
What’s left of ’em.
When they do, I go to work. [5]

This is the city. Los Angeles, California.
It’s the motion picture capital of the world.
Some come to Los Angeles to see the stars or try to become one.
Others come here and die.
When they go suddenly and with no apparent reason,
that’s when I go to work. [6]

This is the city. Los Angeles, California.
Some people claim it’s a collection of suburbs, not a city at all.
Others say that in ten years,
every city in America will look like Los Angeles does today.
One thing sure, it’s a city that’s not afraid to experiment,
where the unusual is taken for granted.
Five thousand people move to Los Angeles every month.
The Los Angeles County Art Museum.
To some, this might be an incentive to settle here.
A block away, you can look at the city and its inhabitants
the way things were ten million years ago. [image of the La Brea Tar Pits]
This is East Fifth Street, home address for dreams that never came true.
A few people believe that life owes them something
and the way to collect it is at the point of a gun.
That’s where I come in. [7] 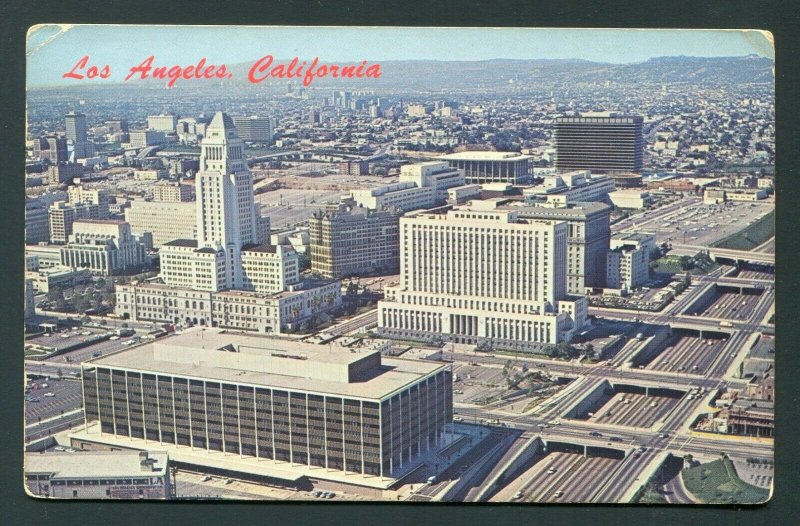 This is the city. Los Angeles, California.
Two and one-half million people live here.
Every month, five thousand more crowd in.
Tourists spend over a billion, one hundred million dollars a year
in Southern California.
It’s a big business.
On Olvera Street, you can buy the best Mexican handcrafts
this side of Mexico City.
Anything you’re looking for, Los Angeles has it.
If it’s for sale, you can buy it.
Some people don’t bother bringing money.
They do their shopping at the point of a gun.
That’s when I come in. [8]

This is the city. Los Angeles, California.
This is Wilshire Boulevard.
Forty years ago, these were bean fields.
Now they call it ‘The Miracle Mile.’
This is MacArthur Park. It’s on Wilshire Boulevard.
For ninety cents, you can rent a boat for half an hour.
A lot of old people live around the park.
Most of them draw pensions.
You can live pretty good in Los Angeles on a pension —
if you’re careful.
When you’re old, sometimes you need good medical facilities.
The city has them.
Once in a while, somebody tries to take
what little the old have away from them.
That’s when I go to work. [9]

This is the city. Los Angeles, California.
On Spring Street, you’ll find
the Pacific Coast Stock Exchange and the big banks.
You can borrow a million dollars on a few minutes notice –
if your credit’s good enough.
The people who make or get the million-dollar loans
usually live a long way from their work.
Many of them here in Bel-Air.
Hundred-thousand-dollar homes are commonplace here.
So are half-million-dollar estates.
The good life of Bel-Air attracts some of the best lawyers,
doctors, bankers, and merchants.
It also attracts some of the best thieves.
That’s where I come in. [10]

This is the city. Los Angeles, California.
It’s a big city with a big heart and it offers a lot.
Museums, libraries, galleries, playgrounds,
beaches, valleys, and mountains.
Angelenos are proud of our new Griffith Park Zoo,
which houses animals from all over the world.
The king of beasts and his jester. The proud. And the profane.
Not all of the wolves and jackals who come to Los Angeles
are in the zoo.
A lot of them wind up in the city jail.
My job is to put ’em there. [11]

This is the city. Los Angeles, California.
It’s a fine place to enjoy life.
There are places reserved just for kids
when they’re young and feel young.
Places they go when they’re young and feel old.
Beginning the big search for something
that often doesn’t exist in the places they look for it.
They might find it here [image of a church]
or here [image of a synagogue] or maybe here [another church].
They could try looking here [ The Griffith Observatory].
Their search might end with a college degree.
One thing sure. Whatever they’re looking for
cannot be found inside a Number 5 capsule.
When they try, that’s where I come in. [12]

[2] For the album, You’re My Girl: Romantic Reflections by Jack Webb, composer and arranger Billy May arranged and conducted orchestral versions of a dozen songs, including “Try A Little Tenderness,” “When Sunny Gets Blue,” “Nancy,” and “But Beautiful.” Jack Webb spoke the lyrics.

[6] From Episode 7: The Hammer. While Hollywood is the oldest national film industry, India is the world’s movie-making capital, producing three times as many films. In 2020, China became the largest box office territory.

[7] From Episode 9: The Fur Job. The U.S. Census Bureau shows that the City of Los Angeles saw a population decline of 40,000 during the pandemic, ranking fourth among the top 15 U.S. cities with the largest numeric decline from July 1, 2020 through July 1, 2021. East Fifth Street in downtown Los Angeles is part of Skid Row.

[8] From Episode 5: The Masked Bandits. Despite effects of the pandemic, visitor spending in California topped 100 billion dollars in 2021. Olvera Street in downtown Los Angeles remains an historic, and free attraction, although some complain that much of the Mexican artifacts sold in kiosks are, in fact, imported from China.

[9] From Episode 6: The Bank Examiner Swindle. According to NewsBreak, the neighborhood surrounding MacArthur Park is one of Los Angeles’ poorest, known for a high crime rate and gang activity. “On any given night, the park’s homeless population will outnumber the park rangers by a ratio of at least three to one.” The south side of the park, where the lake is located, is closed for “beautification.” There is no boat house at this time.

[11] From Episode 14: The Subscription Racket. The new Los Angeles Zoo, which replaced the “inadequate, ugly, poorly designed and under-financed collection of beat-up cages” of the original Griffith Park Zoo, opened in November 1966 and has had a number of notable escaped animals. In half a decade during the late 1990s and early 2000s, at least thirty-five escaped, including zebras, chimps, kangaroos and antelopes. Evelyn the gorilla broke out of her enclosure at least five times.

[12] From Episode 1: The LSD Story: Often referred to as “Blue Boy,” this was the pilot, and best remembered, episode of Dragnet 1967. Friday and Gannon refer to a call for the person dressed “painted up like an Indian” and “chewing the bark off a tree.” They find a kid with his head buried in the ground. When they pull him up, it’s revealed that one side of his face is painted blue, the other half yellow. “You’re pretty high and far out, arent’cha?” Friday tells the suspect known as “Blue Boy.” “What kind of kick are you on, son?” The episode about LSD was the first Dragnet episode in color.

Coming Soon: The Poetry of Dragnet 1968