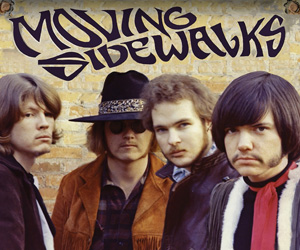 Before living guitar legend Billy Gibbons led the hard bearded bluesy shuffle of the Houston power trio of ZZ Top into the Rock & Roll Hall of Fame, he cut his teeth on the sunny, fuzzed-out, teenage psychedelia of the Moving Sidewalks. The Sidewalks scored a hit single in 1967 with “99th Floor,” recorded the album Flash for Wand records, opened for The Jimi Hendrix Experience, and claimed their place in Texas psych rock history alongside their heroes The 13th Floor Elevators.

Austin 1965, a UT psychology student and LSD evangelical named Tommy Hall, was a man on a mission. Inspired by Bob Dylan and Timothy Leary, Hall would spread the message of mind-altering consciousness expansion through rock & roll. Hall, however, was not a rock & roller, but he knew where to find some. Hall scouted bands throughout the Texas scene and set his sights on The Lingsmen. Still, Hall was not sold on The Lingsmen’s singer Max Range and instead coaxed eighteen-year-old Roky Erickson, then lead singer of The Spades, into jamming with Lingsmen’s rhythm section. Hall shared songwriting duties with Erickson and hooted into a miked-up kerosene jug. Sparks flew, and The 13th Floor Elevators were born with a group acid trip to seal the deal.

Meanwhile, singer-guitarist Billy Gibbons was destined for stardom. The 14-year-old Gibbons was already a veteran musician when he formed The Coachmen in Houston. His credits included the blue cover band The Saints and the r&b soul band Billy G and Ten Blue Flames. “We’d take turns torturing our parents in the garage. We’d go here, go there. (whiney teenage voice) ‘Please.'” Gibbons recalls in a November 2018 Shindig interview. The group covered blues and rock ‘n’ roll on the teen circuit and recorded a couple of original numbers, “Stay Away” and a song called “99th Floor”. The Coachmen broke up a short time later, but Houston had not heard the last from Billy Gibbons. 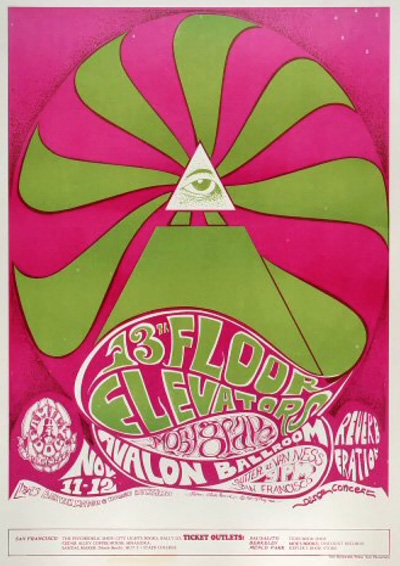 In May 1966, The 13th Floor Elevators released their iconic hit single, “You’re Gonna Miss Me,” and led the Texas psych-rock revolution. Blown away by Ike Walton’s tight urgent beat, Stacy Sutherland’s dark, hypnotic surf hooks, and Roky Erickson’s soulful yet blood-curdling screams, Billy Gibbons and ex-Coachmen drummer Dan Mitchell formed the Moving Sidewalks with bass player Don Summers and keyboardist Tom Moore. The newly psychedelicized Sidewalks had a leaner, meaner, more dynamic sound than the looser garage party vibe of The Coachmen. Even in his teens, Gibbons was showing an ear for hooks. Before long, the Sidewalks would also take the stage at Houston’s Love Street Light Circus Feelgood Machine along with the Elevators.

As “You’re Gonna Miss Me” reached #55 on the national charts, the Elevators booked shows in San Francisco performing with Buffalo Springfield, Moby Grape, and Jefferson Airplane at The Fillmore The Avalon. Under their charismatic jug player, Tommy Hall, the band came together as a soulful psychedelic garage rock unit on the astral plane, except for drummer John Ike Walton. After a bad first trip, he refused to take any more acid and served as the band’s reluctant anchor into the 3D.

Upon returning to Texas to record The Psychedelic Sounds of The 13th Floor Elevators, with producer Lelan Rogers (yep, Kenny’s Brother), the Elevators narrowly escaped jail time after a hastily executed pot bust to Tommy Hall for dealing and the rest of the band for drug possession. Roky Erickson got off on a technicality when the police had listed the wrong address on his arrest warrant. Tommy Hall and guitarist Stacy Sutherland received suspended sentences, and the rest of the charges were dropped due to a lack of evidence. Despite the band’s initial victory in court, the arrest was only the beginning of their legal troubles. Cleared for travel by the courts, the Elevators promptly returned to San Francisco but were soon called back to work on their gripping, atmospheric follow-up album Easter Everywhere. By 1967, the Elevators were on their third bass player (Danny Galindo) and their second drummer (Danny Thomas).

Back in Houston, the Moving Sidewalks recorded their version of “99th Floor” at Bill Quinn’s Gold Star Sound Services, on a tip that New York City record producer Bobby Shad was coming to Houston to scout for new talent. The Sidewalks drew heavily on the Elevators’ “You’re Gonna Miss Me” with its r&b sense of space and tension between verse and chorus. Billy Gibbons even screams for us going into the harmonica-led guitar solo at the 1:49 mark.

“99th Floor” was a local hit and scored the Sidewalks a record deal with Wand and recorded their debut album, Flash. Bold as love, Flash is a zesty goulash of all the Sidewalks musical influences such as Eric Burdon & the Animals (“You Don’t Know The Life,” “No Good To Cry”), The Seeds (“Flashback”), and The Jimi Hendrix Experience. Hendrix’s impact is most palpable on such Sidewalks tracks as “Scoun Da Be,” “Pluto – Sept. 31st,” “Eclipse,” and “Reclipse.” Jokes aside, Flash is a fascinating snapshot of young Billy Gibbons’ evolution as a blues-rock guitarist, going toe-to-toe with his heroes.

On the strength of The Sidewalks hit single “99th Floor”, the band also landed opening slots with The Jeff Beck Group, The Doors, and none other than Eric Burden and the Animals. However, the most profound experience came when Jimi Hendrix chose the band as an opening act on his US tour. As fate would have it, the Sidewalks, who had begun playing “Foxy Lady” and “Purple Haze” as part of their warm-up, needed 40 minutes worth of material as part of their performance agreement and had to include the covers to round out their set.

“I’ll never forget the opening night. We played ‘Foxy Lady,’ and I happened to look over on the side of the stage, and there was Jimi Hendrix with his arms folded grinning. And we came offstage, and he said: ‘I like you. You got a lot of nerve,'” Gibbons recalls in ZZ Top: That Little Ol’ Band From Texas.

Years of undiagnosed schizophrenia and copious amounts of LSD caught up with Roky Erickson by the band’s third album, the underappreciate Bull of The Woods, leaving guitarist Stacy Sutherland to take over the reins on what was to be the Elevators’ last studio album. The band’s label, International Artists, released a fake Elevators live album complete with dubbed crowd noises and The 13th Floor Elevators broke up in 1969. That same year, police, hell-bent on busting the band, arrested Roky Erickson for possessing a single joint. Erickson pleaded insanity and was sent to Rusk State Hospital for the mentally ill. Despite barbaric rounds of prescribed electroshock therapy and Thorazine for his schizophrenia, Erickson continued to make music at Rusk. According to The Guardian’s Dorian Lynskey in a 2007 interview with Roky Erickson, “he formed a band called the Missing Links, playing rock’n’roll oldies,” and “was the only member who hadn’t killed anyone.” Mercifully, his brother, Mike, fought to release him from Rusk in 1972.

Roky Erickson released albums throughout the late 70s and 80s as a solo artist with backup bands The Aliens and The Explosives but battled worsening health problems. Roky’s younger brother Sumner took over his care in 2001, and Erickson returned to live performances in 2007.

After their tour with The Jimi Hendrix Experience in 1968, Moving Sidewalks members Don Summers and Tom Moore were drafted for the Vietnam War, signaling the end of an era for the band. Determined to keep the music going as a trio, Gibbons and Mitchell brought in keyboard player Lanier Greig with B3 chops to make Iron Butterfly swoon and rechristened themselves as ZZ Top. The band linked up with manager Bill Ham and recorded “Salt Lick” and “Miller’s Farm.” However, the grooves were short-lived as Lanier Greig soon left the group to pursue an acting career, and according to Billy Gibbons, he auditioned for the lead on the sitcom “Mork & Mindy.” Greig also worked as a session player in Los Angeles. Faster than you could “Nanu Nanu,” Frank Beard drove down from Dallas determined to take over drumming duties and, for that matter, the band with his friend and American Blues bandmate, bassist Dusty Hill. Beard recalls in ZZ Top: That Little Ol’ Band From Texas, “I made him jam for about eight hours till his tongue just fell out.” According to Billy Gibbons, “We started off, and they got into a Shuffle C, and the rest is history.”

In 2013, Gibbons reunited with Dan Mitchell, Don Summers, and Tom Moore for New York City and Houston performances. The Sidewalks also shared the stage with their old pal Roky Erickson at the 2013 Austin Psychfest. Gibbons also performed with Erickson and his band, the Explosives, throughout the years and appeared on the Roky Erickson tribute albums, May The Circle Be Unbroken and Where The Pyramid Meets The Eye. Roky Erickson passed away in 2019.

ZZ Top Bassist Dusty Hill passed away last summer. He was 71. As per Hill’s dying request, ZZ Top will carry on their tradition of hard-driving blues-rock and recently announced that the band’s guitar tech Elwood Francis would take over on bass.

On February 4th, Liberation Hall will release a CD reissue of the Moving Sidewalks’ 1969 album, Flash.