R&b singer Richard Berry doo-wopped onto the LA music scene in 1953 as part of his high school group The Flairs, three years before Frankie Lymon and the Teenagers became a household name and two years before Little Richard howled across the Billboard pop charts. It was a time when radio was segregated, and r&b was branded “Race Music” as a warning label to pearl-clutching conservative white America and played on separate stations. Berry had a passion for singing and songwriting and an impressive vocal range from baritone to falsetto. He honed his musical chops in the studio with a revolving lineup of singers and on uncredited hits for the Robins and Etta James when he wasn’t cutting singles with his group under various band pseudonyms for the dodgy Modern Records. Richard was also an excellent romantic foil for female artists Janell Hawkins and Etta James. Still, he hadn’t entirely made his mark until 1957 with the release of his single, “Louie Louie.”

Los Angeles r&b artists in the early 1950s signed to small independent labels who paid their artists a flat fee per song and duped young, often teenage songwriters into signing away their publishing rights. To avoid paying out royalties, they billed the artists for studio time and anything else. Many artists even ignored their exclusive contracts and wrote for competing labels and, in some cases, even appeared on singles uncredited for extra cash. West coast doo-wop and r&b artists made most of their writing opportunities and tours. Still, they were equally frustrated with the long-term exploitation of their talent under unscrupulous exclusivity contracts for very little money. Black artists were especially vulnerable as white cover artists like the Crew-Cuts, and later Pat Boone scored hit singles on the national pop charts with bland, sanitized renditions of their hot r&b hits.

The Flairs also released the single “Rabbit on the Log,” as The Hunters, a standard label tactic to maximize profit and avoid competing releases. Modern arranger and saxophone player Maxwell Davis liked Richard and found him the keenest to work on sessions. Modern also shuffled Richard between groups on an as-need basis since he had the broadest vocal range and had him sing baritone for future Milwaukee Braves outfielder Arthur Lee Maye and his group the Crowns. The Flairs also backed up Berry when he invited classmate Jennell Hawkins to record as Ricky & Jennell. Modern also had Flairs’ singer Obie “Young” Jessie cut singles as a solo artist and lead the group on the Hunters” b-side “Down At Hayden’s.” Cornell Gunter also sang lead on Flairs’ single “You Should Care For Me,” as well. 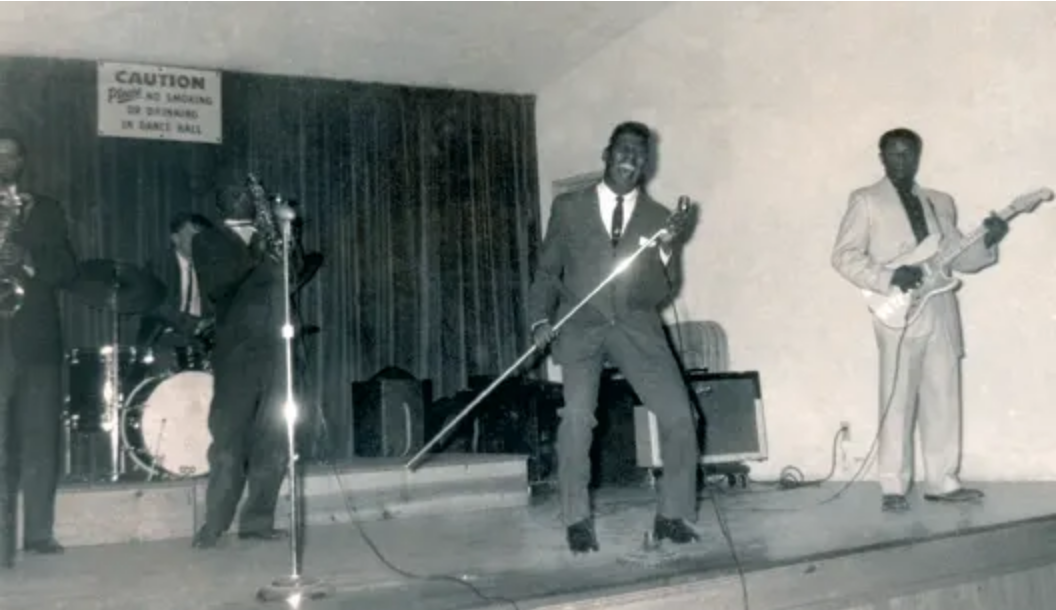 Legendary songwriting duo Leiber and Stoller also took note of Berry’s vocal talents. They poached Richard for their session with the Robins when they couldn’t get singer Bobby Nunn to sing the Willie Mabon-style stop blues vocal on their latest number, “Riot in Cellblock #9.” Richard nailed the sinister stop-blues performance and scored The Robins a hit with the single, which even got rotation back east, but Berry had to appear on the single uncredited as he was under contract with Modern. The Bihari brothers who ran Modern knew about Richard’s appearance on “Riot” and had him cut the follow-up song “The Big Break” with Arthur Lee Maye & the Crowns to compete with the single. A short time later, Berry left the Flairs for a solo career, and Cornell Gunter took over lead vocals.

Richard experimented with different singing styles. He recorded a couple of Little Richard numbers (“Yama Yama Pretty Mama”; “Mad About You”) as well as bluesy ones like “Crazy Lover” and “Rockin’ Man” and a little more stop-blues with “Oh! Oh! Get Out of the Car.” Berry also sang with female singers The Dreamers, who later became The Blossoms. A few of his former Flairs even backed him as The Cadets on his single “God Gave Me You/”Don’t Cha Go.” And if The Cadets sound familiar, you might know the group’s hit cover of The Jayhawks’ “Stranded in the Jungle.” 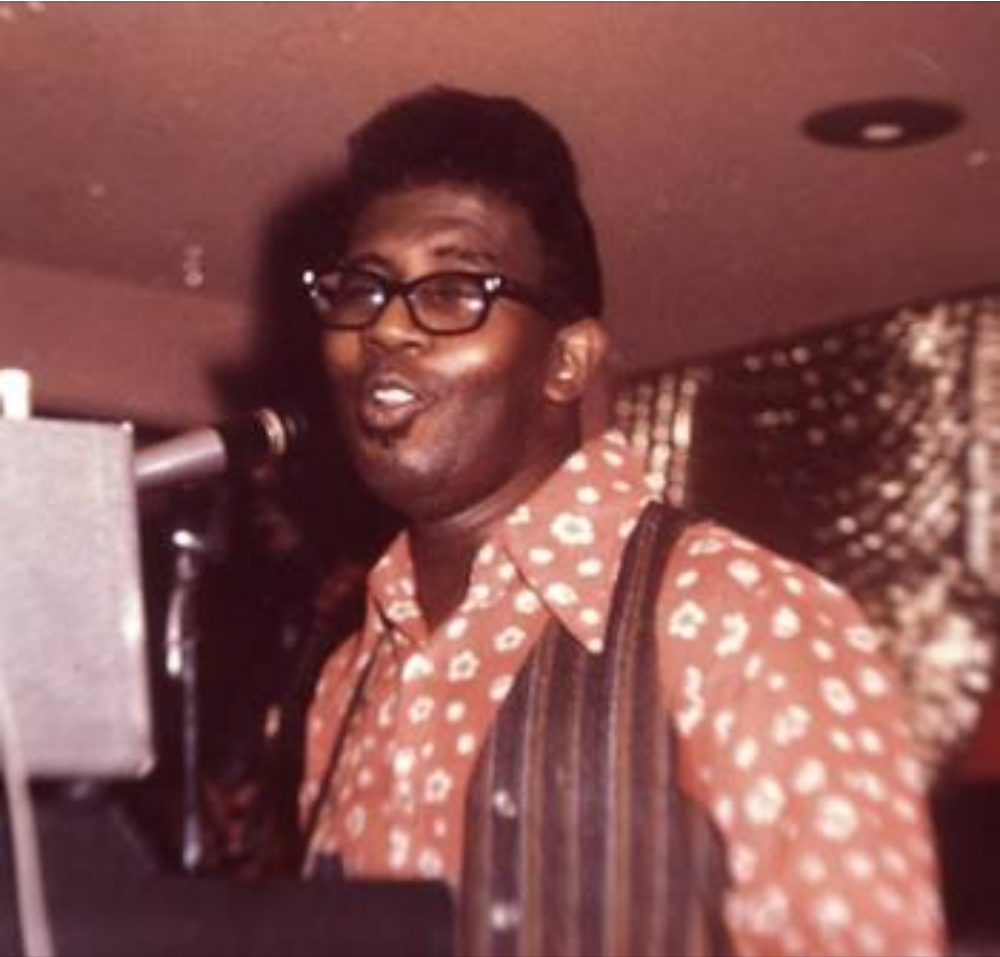 Modern arranger Maxwell Davis paired Richard with Etta James for the single that became “The Wallflower,” aka “Roll With Me, Henry,” a saucy reply tune to Hank Ballard and the Midnighters’ single “Work With Me, Annie.” According to Richard Berry in Louie Louie, “Etta wrote most of the words, and I helped her a little, but Johnny Otis, who was there on the session, beat her out of the writer’s credit.” Berry also wrote the Etta single “Good Rockin’ Daddy.”

“The Wallflower” was a big sexy hit on the Billboard R&B charts but didn’t receive airplay on the country’s squeaky clean pop stations. Notorious cover artist Georgia Gibbs swooped in and scored a number one with her chaste rendition, “Dance With Me, Henry.” Rumor has it that Gibbs pissed off LaVerne Baker so bad with her copycat cover of Baker’s “Tweedle-Dee,” that she named Gibbs a beneficiary on her flight insurance policy in the event of her death so that Gibbs would have some money to fall back on. And once again, Richard Berry appeared uncredited.

Richard Berry was paid by the song but never received publishing royalties on his compositions for Modern records because the Bihari brothers registered his works under “Josea” and “Ling” to keep the royalties for themselves. The Biharis, at this time, put considerable energy into their super cheapo label, Crown, which would become equally famous for its inept cost-cutting manufacturing practices as it would for its tacky trend-chasing releases on poor-quality vinyl.

Jules Bihari even got in hot water with RCA after selling a lot of misnumbered releases to outlets instead of melting them down with the rest of the vinyl scrap he was supposed to press into new records. Richard was fed up with Modern and signed a deal with Flip records while still under contract in 1955. Richard Berry eventually sued Modern Records for $50,000 in back royalties and was awarded $1,800 five years later. 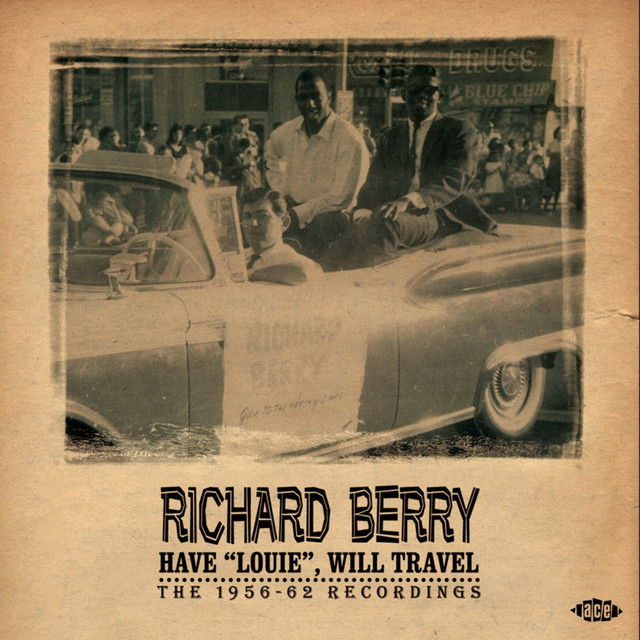 While at Flip, Richard continued to branch out as a singer and songwriter and began singing with old friends from his high school days who performed as the Pharaohs. Richard also started performing live in Orange County with Filipino-American brothers Rick and Barry Rillera’s rock ‘n’ roll group, The Rhythm Rockers. Richard dug their funky Latin sound and sang on their r&b numbers for the lowrider crowd in Orange County. Berry was especially struck by the Rhythm Rockers’ live rendition of Cuban Bandleader René Touzet’s “El Loco Cha Cha Cha” while at a gig at the Harmony Park Ballroom in Anaheim. Berry loved the opening rhythm and, with a bit of inspiration from Chuck Berry’s calypso ballad “Havana Moon” and Frank Sinatra’s “One For My Baby (And One More For the Road),” came up with the lyrics and melody for “Louie Louie.” Richard envisioned the song about a lovesick Jamaican immigrant with a big percussive sound akin to pre-Eric Burdon and War-style funky Latin soul. Max Freitag at Flip records wasn’t feeling the idea and ordered Berry to record the song as a straight R&B tune. Richard acquiesced and sang the “Duh-duh-duh, duh-duh, duh-duh-duh, duh-duh” on the track when he recorded the tune with the Pharaohs in 1956.

In 1957, Flip released “Louie Louie” as a b-side to their single “You Are My Sunshine.” In the grand tradition of b-sides, radio DJs preferred “Louie Louie” to the group’s A-Side, and the song became a modest hit in LA and the Pacific Northwest, where the group toured. “Louie Louie” was not the funky Latin calypso cut Berry had envisioned, and it wasn’t on the charts, but the song’s off-the-wall simplicity tapped into the rock ‘n’ roll zeitgeist as the fifties came to a close and took on a life of its own.

Local rockers in the Sea-Tac area were hot for “Louie” and covered the song straight away. Tacoma legends The Fabulous Wailers were the first to score a regional hit with their cover in 1961. Two years later, The Kingsmen beat out fellow Portland rockers Paul Revere and the Raiders with their rowdy take on the tune recorded in the same studio a week apart from each other in 1963. The hastily recorded single was a one-take wonder with singer Jack Ely slurring Berry’s words through the spit bubbles in his braces into a suspended overhead mic and commanding the group with squeaky adolescent swagger. Ely even jumps in too early after the solo. Bless him! And if you listen closely at the 0:54 mark, the drummer drops an f-bomb. The result was a raw thing of chaotic beauty that helped immortalize Richard Berry’s accidental regional hit into a universal party anthem. 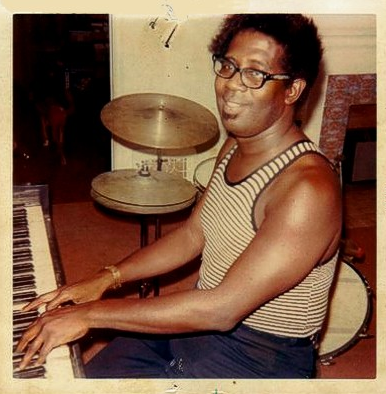 Boston DJ Arnie Ginsberg dubbed The Kingsmen’s “Louie Louie” the worst track of the week on his show. Bostonians, however, loved the single and made it a hit––good ol’ Massholes.

As “Louie Louie” went national, Kingsmen singer Jack Ely’s slurred vocals led to hokey teenage theories about the song’s supposed dirty lyrics. The state of Indiana banned the song outright. Sarasota citizens concerned about the imminent threat of dirty lyrics prompted an even hokier FBI investigation on suspicion of trafficking obscene material across state lines. After a two-year investigation, the FBI ruled the tune was “unintelligible at any speed,” even though Ely was singing Berry’s original words.

Richard Berry, meanwhile, had sold his song and publishing rights to “Louie Louie” to Flip records for $750 along with his 1959 single “Have Love Will Travel” (made famous by Seattle rockers, The Sonics) to help pay for his wedding to his sweetheart, Dorothy Adams. The couple divorced in 1969 but remained friends. Berry continued to record music and sang with The Soul Searchers throughout the sixties. Adams was also a singer and went on to sing back up for Ray Charles as a Raelette in 1971. Richard even sang a duet with Dorothy on her song “The World Needs Peace,” according to The Louie Report.

By 1983, “Louie Louie” fever raged on with covers from The Beach Boys to Black Flag. Bay Area radio station KFJC held the “Maximum Louie Louie” marathon, playing “over 800 different versions of the song,” according to Eric Predoehl’s The Louie Report. Berry was a guest of honor and even met original Kingsman singer Jack Ely for the first time.

A couple of years later, California Wine Cooler wanted to use “Louie Louie” in their commercial ad campaign. The company soon discovered that they needed Richard Berry’s signature when they applied for permission to use the song. Berry, who had left the music business in the mid-seventies, worked various jobs, and was on welfare in South Los Angeles when a lawyer for Artist Rights contacted him and urged him to reclaim his rights to “Louie Louie.” The current rights holders settled after the court determined that Flip records had illegally cut Berry out of millions of dollars in royalties.

After years of struggling anonymously throughout his music career, Richard became a millionaire and a career revival with toured the US and the UK performing “Louie Louie” for a whole new generation of fans. In 1994, Berry suffered a heart aneurysm and quit the road but reunited with The Pharaohs in 1996 as part of a benefit concert for the Doo-Wop Society of Southern California.

Richard Berry passed away from heart failure in 1997.