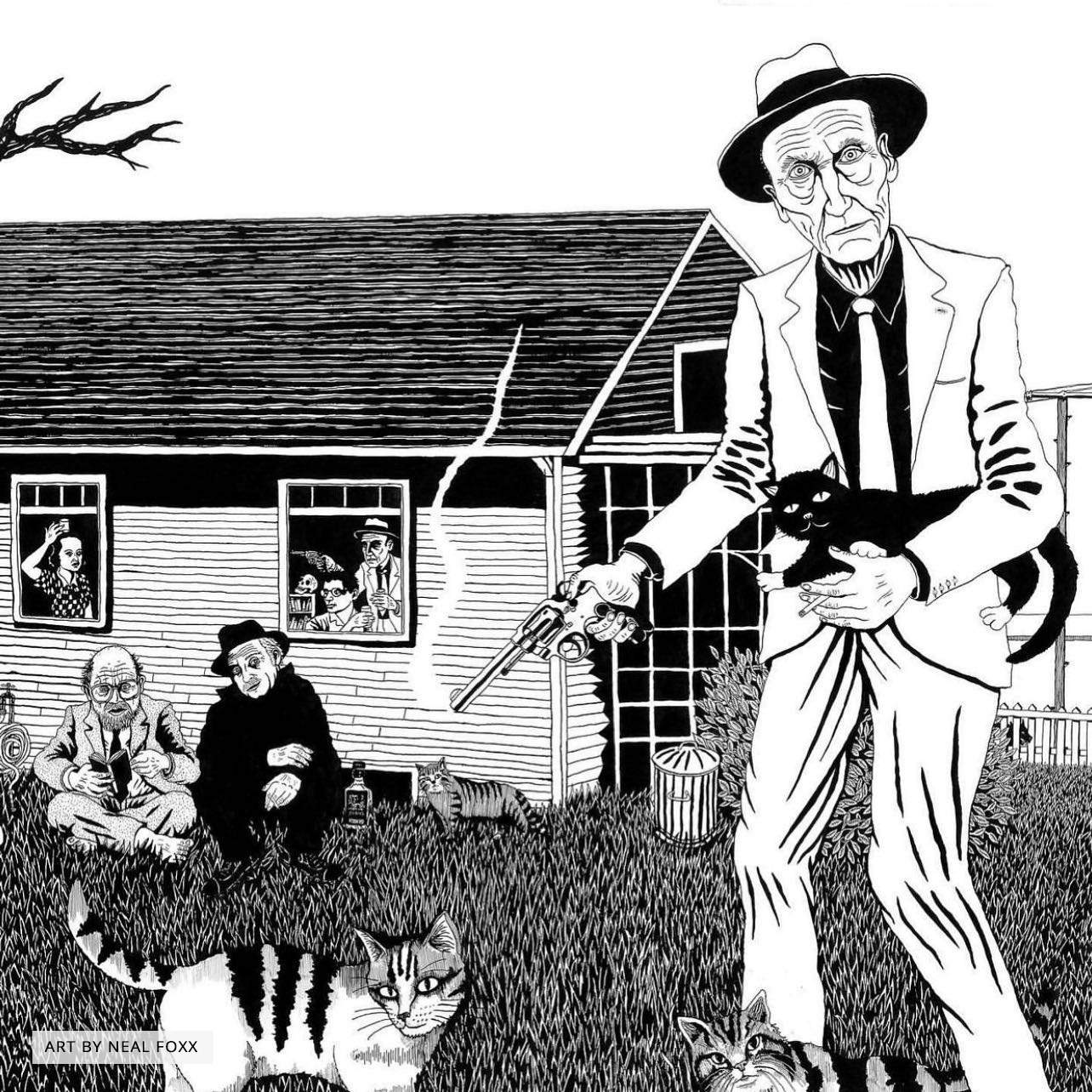 © 2022 by Robert Hockett | Robert C. Hockett is a Professor of Law at Cornell University who used to live in Lawrence, Kansas and play in a garage band a few houses away from William S. Burroughs. On his 108th birthday, Robert remembers Bill hanging out at his house, watching the band.

It’s always seemed to me there are dogs that will cling to you closely and follow you room to room, and there are dogs that aren’t like that at all– dogs that trot straight to a quiet corner where they can keep watch as they leave you to your own proceedings. Many of us, I suppose, are dogs of both kinds, depending on the hour or the day or the week. William Burroughs was a dog of the second kind, no matter the hour, the week or the day.

In the days I’m recalling Burroughs lived fairly nearby. We dwelt in a decaying old three-story Victorian, my friends and I, each with his own room or rooms. On weekends we often threw improvised musical gatherings at which Bill would turn up. He’d stride straight to Bill’s Chair in our living room and not say a word. He’d just watch our proceedings from there in his corner, ash-faced and wet-eyed.

This all started because Lori worked at the Dillon’s on 18th and Mass. She was a checkout girl and Dillon’s was Bill’s grocery store. Bill fell into a habit of always paying at Lori’s register because she knew who he was and didn’t make a thing of it. She’d simply said ‘find everything, Mr. Burroughs?’ one day, without having made his acquaintance before. After that Bill always queued at her register.

One day weeks into their checkout line courtship, Lori told Bill we’d be playing tomorrow and gave him our address. She lived with us too then – she was Darrel’s girlfriend, and sang beautifully.

Bill arrived early the following evening, tastefully dressed in that rumpled old suit, and made for the chair as if it’d been predestined. Maybe it was; he did this repeatedly thereafter and everyone knew it as Bill’s Chair.

In time Bill began to come early– Saturdays around five were his norm– and would watch us set up. We’d move tables to clear dance space, strew amps, mics, electric appliances and instruments everywhere, and prepare punch. Bill would sit almost invisibly, courtly and quiet and gray. He seemed to crave being near happy young self-styled “artists” who bantered and laughed at each other’s woulddabeen witticisms and not having to talk to them much. We left him alone unless it was sometimes to offer him something to drink as he followed our movements. “Tea, Mr. Burroughs?”

One evening we were all singing our nonsense and playing– we used vacuum cleaners, blenders and other loud objects along with more orthodox instruments, Bill seemed to like this– and he sat there watching politely from his chair like a flaneur anthropologist. At length a lumbering hipster named Chunk entered the house and made straight for Bill’s chair with his copy of Junky.

Chunk was awkwardly-bent tall. Always tottering, soft-skinned and slick-haired. Baby-faced like an overgrown adolescent. He usually wore white t-shirts and baggy dungarees as if he were some sort of rockabilly leftover. Bill saw him probably before he had got through the door– Bill had real feelers for this sort of thing– and noticeably stiffened. As the kid closed the distance Bill croaked subtly but with finality: “Fuck off, kid.”

The kid’s face lit up as if he’d been touched by a dove or kissed by a cheerleader. He grinned an ecstatic saint grin and then clutched his book tightly all night as though Bill’s spoken words, uttered while Chunk had been holding it, had somehow themselves autographed the flyleaf.

That is how it was with us back then. Most people didn’t make a fuss. People who did and were slagged didn’t mind all that much. Some even liked it.