“To me punk and metaphysics seem to belong together,” says Tamra Lucid. “Both are rebellions against bullshit. And what is punk anyway? Punk can be for peace or violence, for racism or for equality, for noise or pop, for anarchy or for Broadway. My band has never fit any category. Sucks for algorithms, but so much fun!”  Lucid Nation co-founder Ronnie Pontiac was mentored by American metaphysician Manly Palmer Hall (1901-90) at his Philosophical Research Society in Los Angeles before the band started playing shows in 1994. LN’s second show was in a downtown LA art gallery opening for Team Dresch, followed by opening for Bikini Kill. They toured the West Coast, playing seven riot grrrl conventions in one summer, and backing Warhol superstar Holly Woodlawn at several events. The band released ten albums between 1997 and 2019, most recently Last of the Teens (2019), a collection of lo-fi outtakes with Ken Schalk on drums. Last year Tamra published a memoir about her friendship with Hall called Making the Ordinary Extraordinary (Inner Traditions, 2021). Ronnie’s American Metaphysical Religion is set for release in January. Lucid spoke about punk rock, politics, metaphysics, and more in this email exchange with Happiness author Zack Kopp. 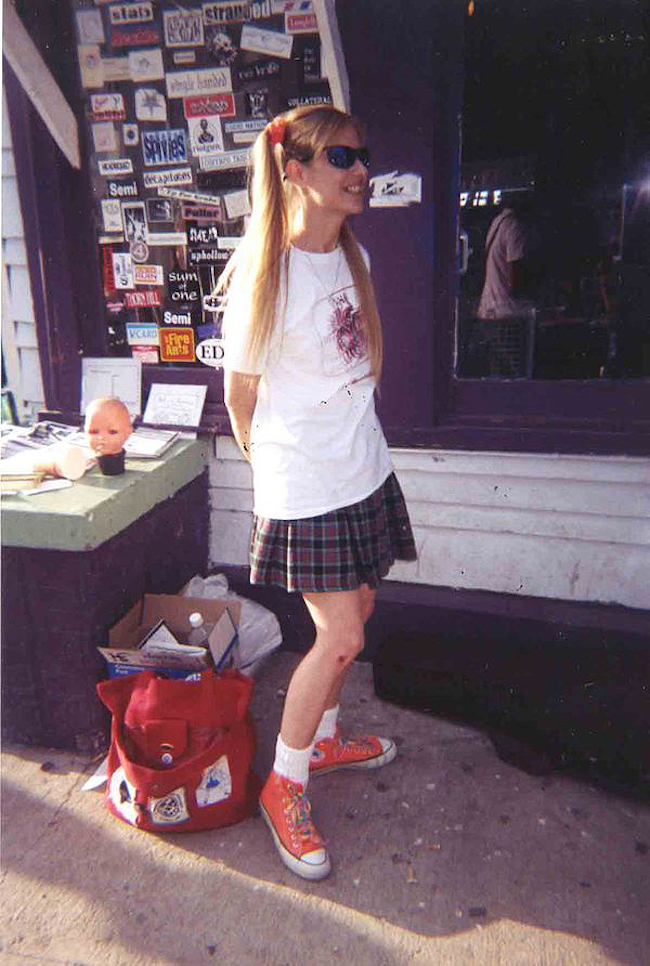 How have you been received in your journey from metaphysics to punk and back again?

Back in the PRS days I was wallpaper. I served refreshments while maintaining a pleasant demeanor. I was only noticed as the significant other of Manly Hall’s research assistant. Which was nice. No one tried to recruit me for their visions or missions. I found most punk scenes to be friendlier than riot grrrl but riot grrrl was where I found my voice again. Shows were cathartic rituals and zines and demos were holy books. Anarcho was the most welcoming. Even had a delegation show up to inform me that my nonconformist long blonde hair at their shows was truly punk. These days I’ve been treated rather nicely in metaphysics. That’s the beauty of writing a book that charms people before they hear my music.

How did punks react to your metaphysical background?

We didn’t keep our metaphysical past a secret, but it wasn’t anybody’s business either. Yet, as life tends to do, we kept meeting punks who had occult interests. Most would only admit it privately. My grandma was psychic. A ghost taught me the guitar chords for this song in a dream. Or a simple what sign are you? They somehow sensed that we would understand, even though we didn’t talk about or wear things that reminded us of our past. 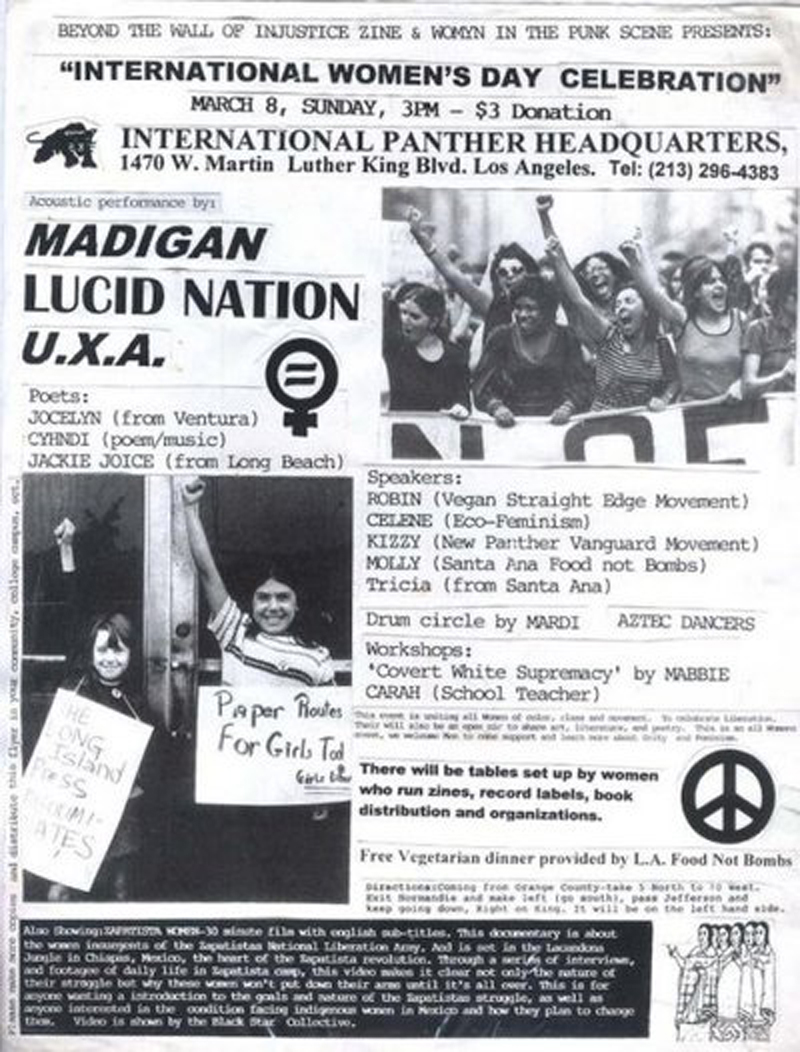 Punk rock is, in essence, about rejecting dominant paradigms. Most adherents think of themselves as sharp-eyed “realists” who limit their attention to facts they feel they can trust while staying clear of uncharted territories like Spiritualism. Describe your relationship to metaphysics as a punk and visa versa.

We were all about music and activism not spirituality, yet we considered activism and music expressions of our spirituality. But I didn’t like talking about those days. I was Manly Hall’s Cassandra. I tried but failed to warn him about the man who may have killed him. It was a relief not talking about metaphysics. The silence felt right, like being a student. I think occultists are the punks of religion: non-conformists setting out to experience reality and express themselves without obeying the rules of how it was done in the past. Who’s more punk than Paracelsus?

Lucid Nation has played shows for Food Not Bombs and the New Panther Vanguard Movement, a couple of causes rooted in human experience more so than political gamesmanship. Describe those experiences.

We encountered both at Koo’s Cafe, a Victorian bungalow at 1505 N. Main, in a rundown neighborhood that is now a gentrified art district in Santa Ana, CA. We heard it was a brothel way back in the day then a chop suey joint for five decades. Peace Punk and Beyond the Wall of Injustice zine sponsored Anarcho Sunday matinees there. Peace Punk booked us as a representative riot grrrl band for a feminist perspective, but we considered ourselves equalists. He invited the Panthers, too. Sadly those shows were a big reason why Koo’s lost the support of the local community. Riot grrrls, crust punks and Black Panthers were too much on a Sunday afternoon in Santa Ana. Undercover cops started showing up. Politicians worked up the local Latino community. But it was beautiful while it lasted.

The Panthers expected Orange County punks to be racist, so when they arrived they marched in formation. They found a welcoming and diverse scene that already knew a lot about them. A Panther bought our Day-Glo green cassette demo with glitter butterfly stickers and gave it a glowing review in their newspaper. They also helped get our zine Eracism to prisoners all over the western U.S. They gave food to hungry kids. They made sure the elderly were looked after, provided legal services, gathered and shared books, and taught history and the law. At a show at International Panther Headquarters on Martin Luther King Blvd in Los Angeles they told personal stories of gangs and prisons urging the skeptical gang members who showed up to turn their lives around.

As for Food Not Bombs, at one of the matinees some of their help didn’t show up for KP. We heard them worrying about being short-handed. Since our set wasn’t until later we volunteered. After that they knew if we were on the bill I could do dishes fast and Ronnie was quick with a peeler. We played Food Not Bombs shows from back porches under oak trees to the occupation of the Pink Flamingo Motel in Santa Monica. Well, we didn’t exactly play that. We showed up with our gear but friends warned us they wouldn’t be able to protect us from people who would take our shit. That and in the room we were supposed to set up in asbestos dust drizzled slowly off the ceiling, shaken loose by the vibration of arguing anarchists.

Do they have to? Aren’t dichotomies and contradictions how souls learn? I think punk, and anti-establishment metal, rock and rap, were political because they would call out or at least laugh at liars and their minions. Wouldn’t you think that spirituality would make people less likely to be assholes? And it often does, there have been metaphysicians who have fought for equality and liberty. But there are plenty of exceptions, metaphysicians into fascism like Evola and the Silver Legion. Aren’t such labels merely convenient caricatures?

Recent efforts to drive an oil pipeline through Standing Rock Reservation on the border of North and South Dakota culminate centuries of violation by invaders, documented in the film End of the Line: the Women of Standing Rock, recently nominated for an Emmy. How did you become involved? How has the film been received?

I had friends going there and I wanted to go, too, but I was told by Water Protectors that the elders wanted me to continue networking online and locally in Los Angeles. Food Not Bombs experience came in handy when I helped organize donations. My interviews with Water Protectors and update posts helped get the word out in the early days of the protest. There were many people making films or just filming but Shannon Kring’s goal was to tell the stories of the leaders, who were women. Her crew was mostly female, too. I’ve had some experience with documentaries so I did what I could.

The film got hardly any support from Hollywood. They told Shannon it would be career suicide. Facebook restricted our simple announcements of screenings as politically extreme. But then this summer came an Emmy nomination, a Humanitas award nomination for Shannon, and it won a Hollywood Critics Association award. I hope more people will see it and learn that water is life, but as the film documents the Water Protectors are leaving big footprints in the courts and at the UN. Their work has led to over a trillion dollars of divestment from big oil.

I caught part of your post about discovering a Lucid Nation bootleg online, which didn’t seem to bother you, for some reason. What was that about?

Those were bedsheet and pillowcase sets. Somebody actually had the idea that the covers of our Ecosteria and Public Domain records would make great linens. Having nightmares about ecological disaster and climate crisis? Why not sleep on sheets that capture your angst? Now thanks to something called the Army Merch Shop you can dream while sleeping on the trapped butterfly or the post-apocalyptic wasteland. The slippers in the photo are a nice touch. 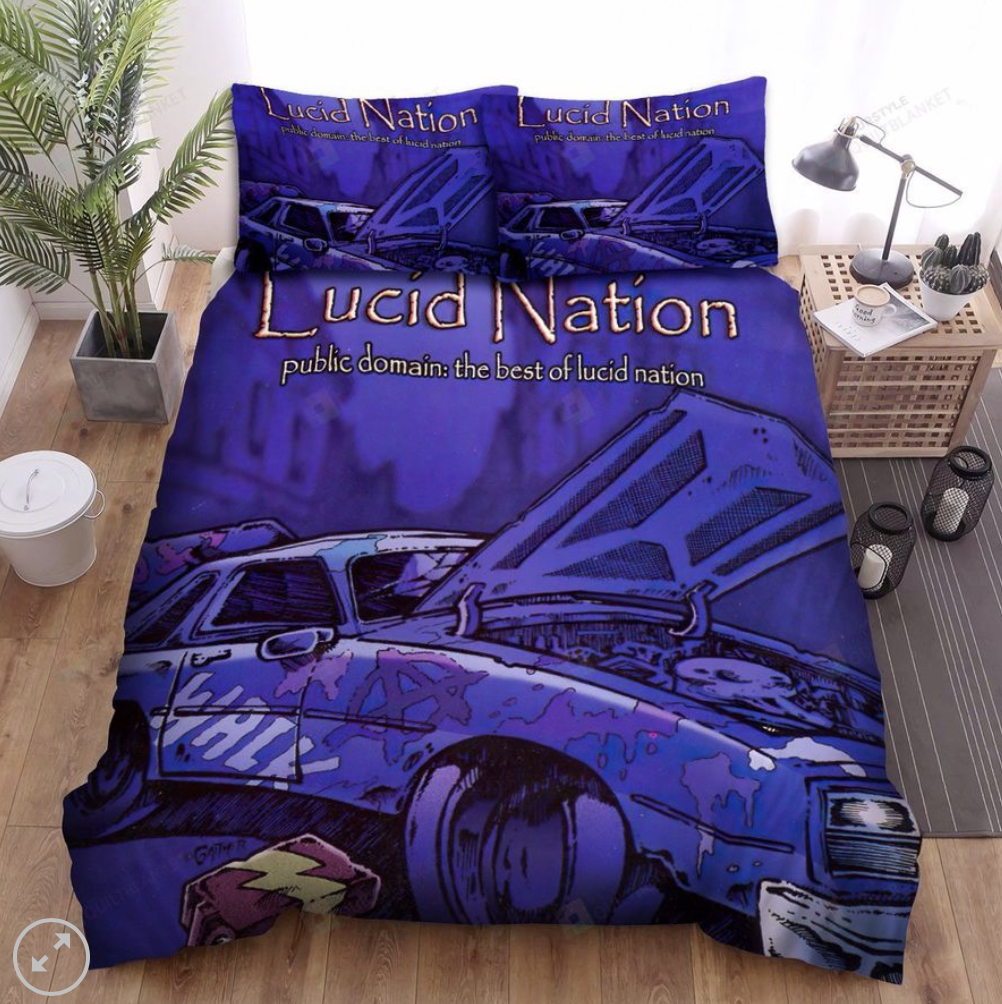