Skip to content
Home » Archive » ORAL HISTORY OF THE MONTH – CALL ME: HERB ALPERT & THE REMAKING OF CHRIS MONTEZ

ORAL HISTORY OF THE MONTH – CALL ME: HERB ALPERT & THE REMAKING OF CHRIS MONTEZ

(Or: How a Jewish Mariachi Trumpeter Turned a Chicano Rock ‘n’ Roller into an Easy Listening Pop Crooner) 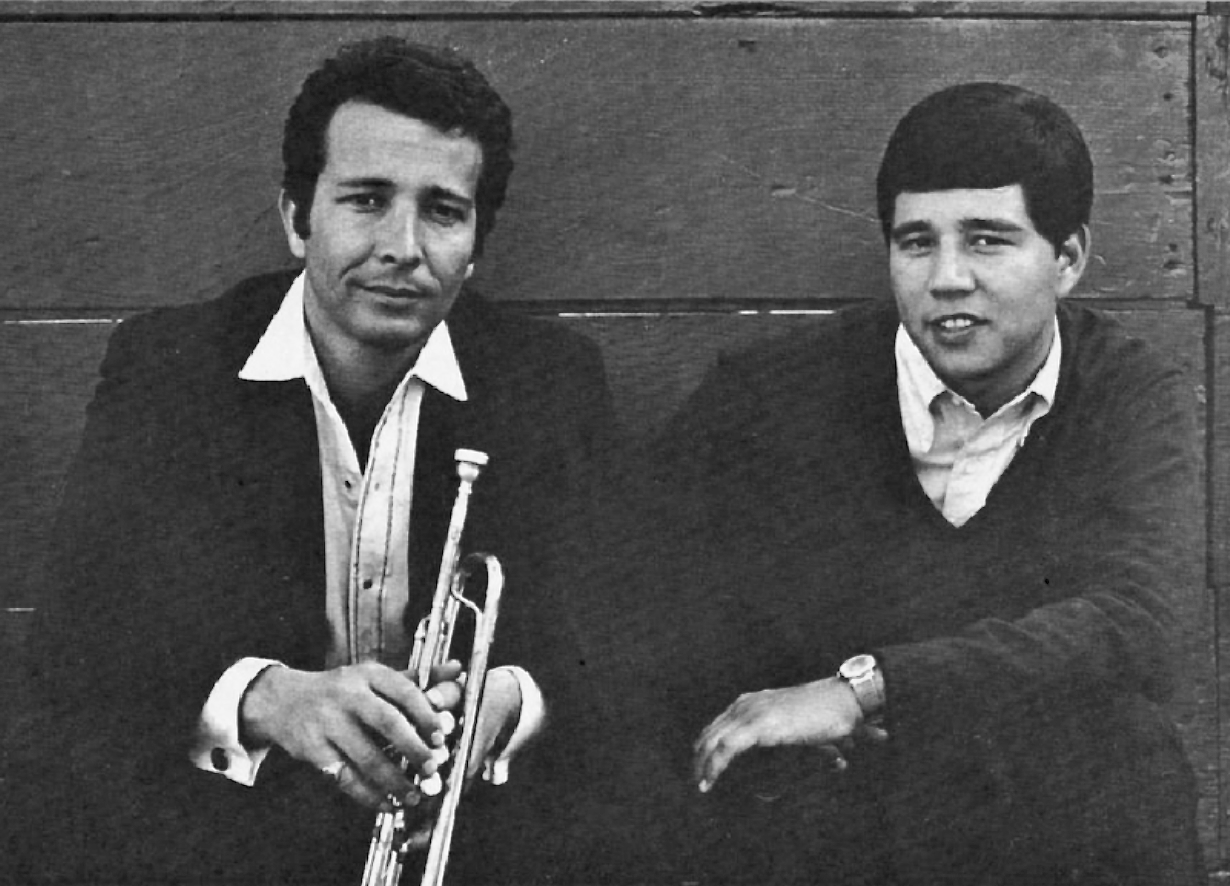 Born in Los Angeles, a high school classmate and friend of Brian Wilson, rock ’n’ roll tenor and devotee of Ritchie Valens, teenage Mexican-American Ezekiel Christopher Montañez got a name change to Chris Montez and at nineteen had a Top Ten record in 1962 with Let’s Dance.

Meanwhile, in another part of L.A., A Jewish singer, songwriter, and trumpeter named Herb Alpert formed a record label called A&M, and inspired by a group of mariachis at a bullfight in Tijuana, recorded a song called The Lonely Bull. The single hit the charts alongside Let’s Dance in the fall of 1962, and also made the Top Ten. The twenty-eight year-old quickly released an album credited to Herb Alpert & The Tijuana Brass. His star began to rise, as Montez’s career had apparently already reached its zenith.

CHRIS MONTEZ: It was the latter part of 1962, when I came back from touring with Sam Cooke. They said, “They want you to go to England.” I couldn’t believe it. “Yeah, you’re a hit, your song’s real big over there, and you’re going to be up there with Tommy Roe” — he had Sheila at the time – “and this group called the, the Bugles, or the Boscoes?” No, they were called the Beatles. Tommy Roe was in the middle and I closed the show. The Beatles were the warm-up group. And the Beatles were getting this momentum going. 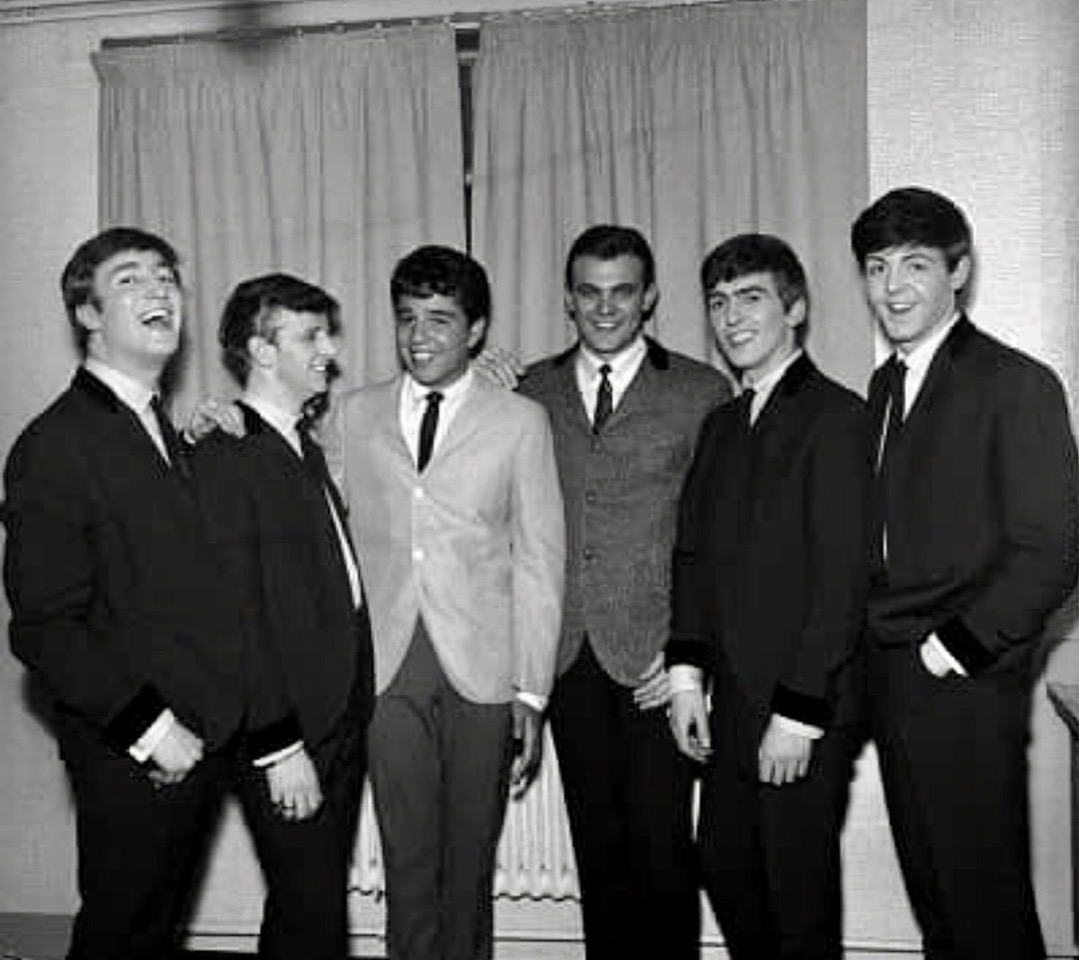 The Beatles were already causing a stir with their second single, Please Please Me, when the 21-city tour of England opened on March 9, 1963 in East Ham, London. The Beatles’ first album was released in the UK on March 22. By March 24, the Beatles were headlining the tour, and remained on top through the last show in Leicester on March 31.

ANDREW LOOG-OLDHAM (tour publicist): Chris came in just as the curtain was coming down. He saw the curtain come down.  I mean, he watched.  He had a wonderful experience, as we all did, but there was no denying what was happening with this incredible phenomenon, the Beatles.  By April, they were it.

CHRIS MONTEZ:  As I was leaving England, Some Kinda Fun was my next release, which became Top 5. After Some Kind of Fun, the record company and my producer weren’t paying me, and they were cheating me. So I decided to walk away from contracts and let them have the royalties because they had a five-year contract with me, and they would just keep me there and I couldn’t record again. So I got away from it. I walked away from my career and I decided to go to college to study music. I couldn’t care less about recording again. I figured there’s other parts of my life I’ve got to continue.

Chris enrolled at El Camino College in Torrance, California and studied music composition. He remained out of the business for two years.

CHRIS MONTEZ: One day, this friend of mine, his name was Bob, had to pick up some recording tapes, and he insisted I go with him for the ride to Hollywood. We got there, and this person came out and said to him, “I’m sorry, I can’t use your material, but thanks anyway.” And Bob said, “Oh, by the way, this is a friend of mine. This is Chris Montez.” And the person said, “You’re Chris Montez, the singer? Who had Let’s Dance?” I said, “Yeah.” He said, “What are you doing?” I said, “I’m going to school.” And he said, “I’d like to have you for my label. Be interested in recording?” I said, “No, no. I don’t want to record any more.” And he said, “Well, think about it. I’d love to have you on my label.” And this is Herb Alpert talking to me. 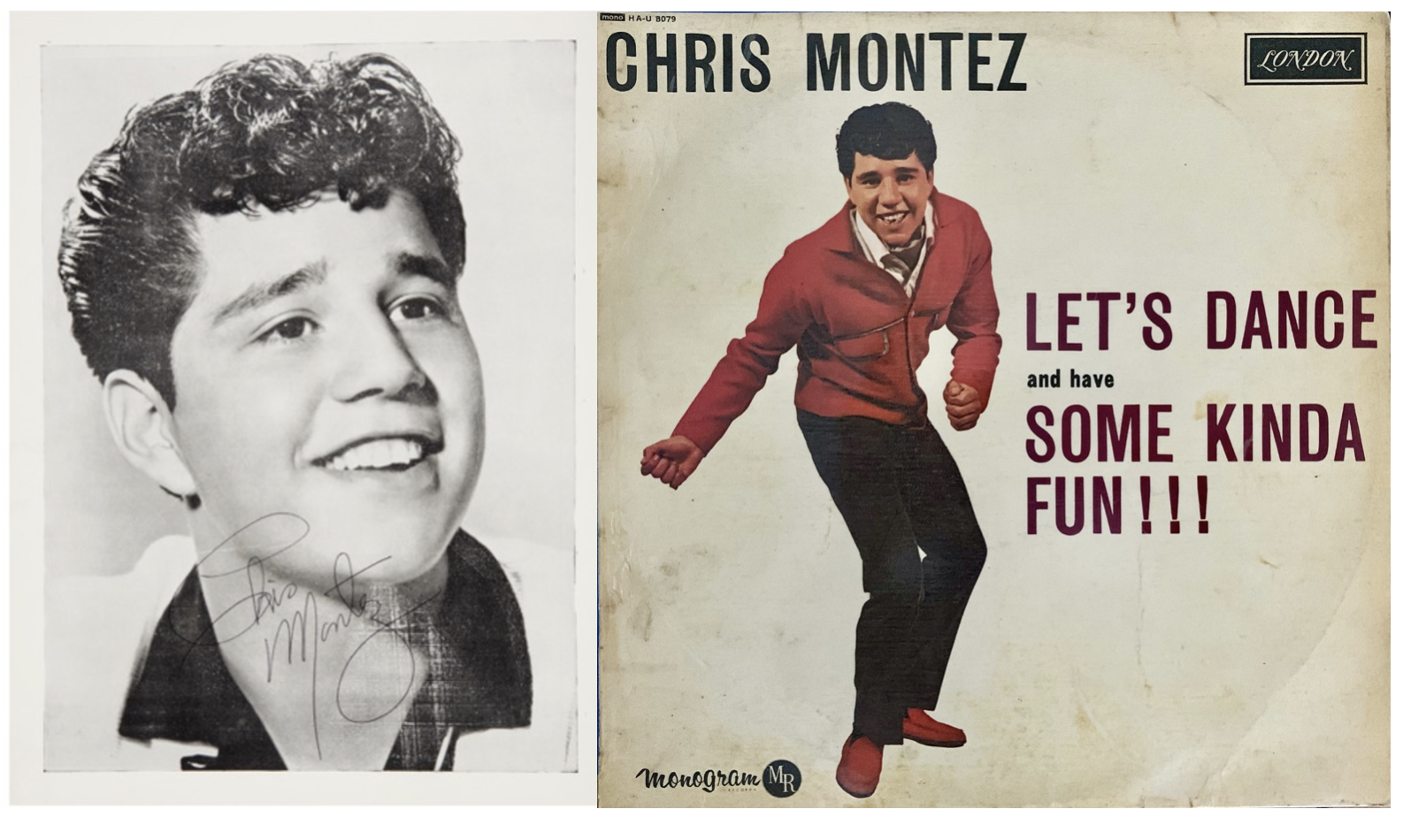 CHRIS MONTEZ: A few months later, I came back, and he got me a staff producer, and we started recording some of the same stuff that I previously was recording. I thought it was good stuff, but the staff producer said, “Herb doesn’t like what we’re doing. He doesn’t like any of the stuff.”

HERB ALPERT: I guess it was rock n roll. I didn’t think it had anything magical happening.

HERB ALPERT: My recall is I was on the road with the Tijuana Brass at the time, and I heard this song, Call Me. I was really in the middle of the Tijuana Brass period at the height of the group, and I wasn’t thinking about too many other artists, although when I heard Chris’s voice, it just struck me that this idea for this song Call Me, he felt like a perfect match for it. I used to work with my guitar player John Pisano, and John and I started working out these ways of doing Call Me. I remember singing it into a tape machine and I sent it to Chris.

CHRIS MONTEZ: Herb said, “I’ve got this song that I’d like to try with you. It’d be great for your voice.” And he started singing this song to me and it goes, (singing) “If you’re feelin’ sad and lonely, there’s a service I can render…” And I looked at him and I said, “You must be kidding.” I mean, I’m a rock ‘n’ roller, and this kind of song to me was something that a mature person would be singing — like a Sinatra!

HERB ALPERT: I said, “Try learning it pretty much the way I’m singing it.” I didn’t want to take away his inspiration or his creativity, but I said, “Yeah, learn it in this kind of way.” Because I had a whole concept of what to put behind it.

CHRIS MONTEZ: I didn’t want to get classified in that genre of music, because I thought, “I’m still a rock ’n’ roller.” But I went along with it.

HERB ALPERT: He did. He learned it that way. And I got together with, I think it was — well, it was Pete Jolly. The great jazz musician was playing piano. Julius Wechter was on vibes. And I don’t really remember the bass player or the drummer. I think the drummer was Nick Ceroli, the drummer that played with the Tijuana Brass. It was either Nick or Hal Blaine. I’m not sure. We recorded it at Gold Star Recorders. I think there was a track and then Chris overdubbed his voice.

HERB ALPERT: That sounds like me. It sounds like I was right in the booth with Chris and doing that. I don’t think Call Me was Chris’s natural instinct of a way of performing. But I was amazed.

CHRIS MONTEZ: And then he says, “Great, great cut. I’ll take care of it from here.” And he hit glasses and got all these voices in the background to sound like a live recording.

HERB ALPERT: There was a record called (I’m In with) The In-Crowd, which was an instrumental. (The Ramsey Lewis Trio’s jazzy take on the Dobie Gray hit, recorded live at the Bohemian Caverns nightclub in Washington, D.C., was released in June 1965 and reached number 5 on Billboard’s Hot 100 on October 9.) I always gravitated towards that really natural feeling opposed to a record that’s really clinical and so sanitized that it doesn’t have a heartbeat. I like that little spillover and then the feeling of it — the spontaneity of it happening on the spot.

CHRIS MONTEZ: So it was Herb Alpert doing that. And he changed my whole sound. 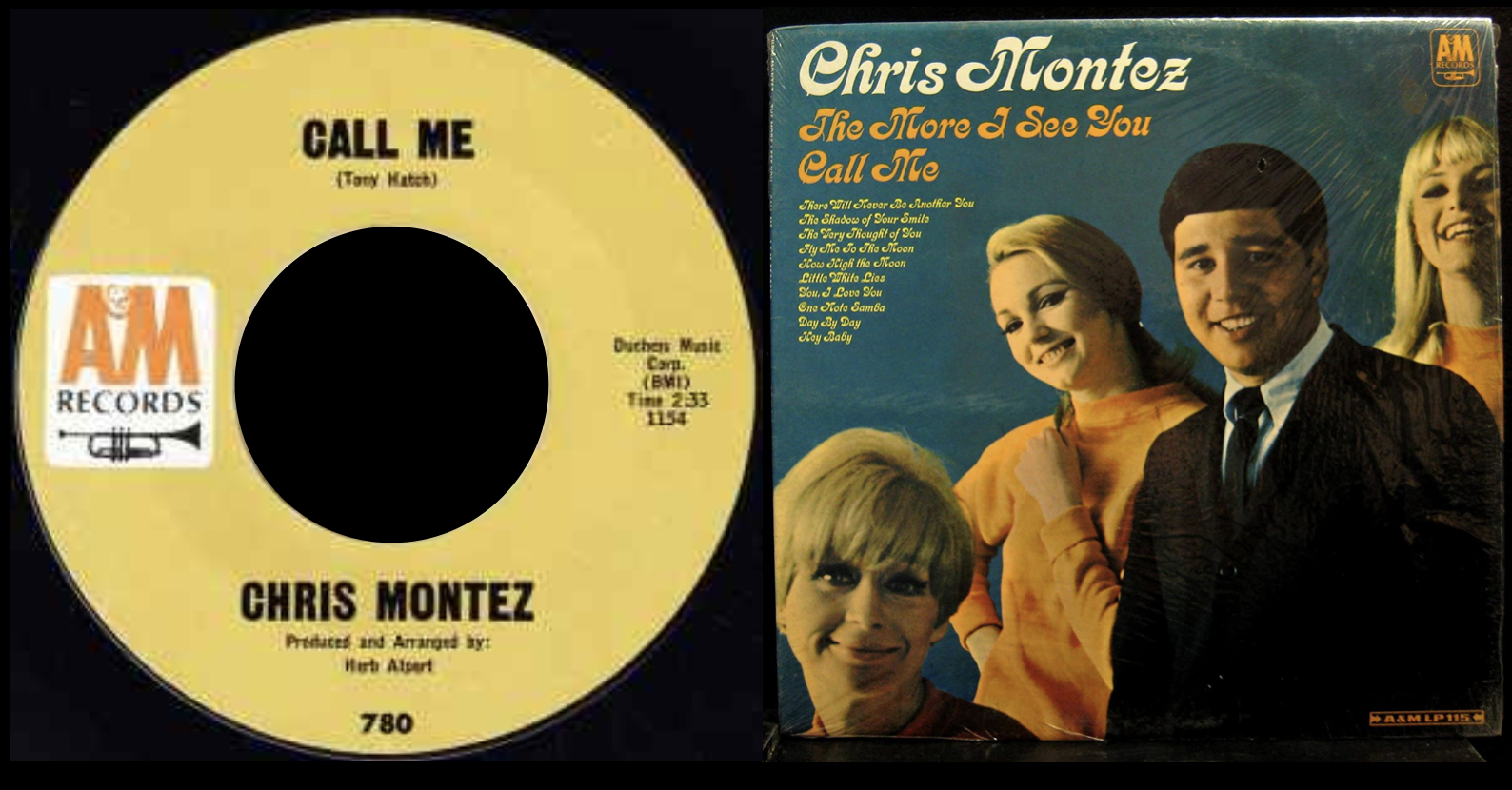 HERB ALPERT: We added some hand claps and that was it. And then I remember hearing the record when it was finished and I thought to myself, “Wow. This is pretty close to what I was hearing when I originally thought of the idea.” And of course, being the “A” of A&M Records, I said, “Sell this thing. Promote it. Do a good job. This is a good artist. He deserves it.”

CHRIS MONTEZ: And after we did that recording, it started getting played. And so all of a sudden, I’m on the scene again.

Call Me, written by Tony Hatch and originally recorded by Petula Clark, was released in November 1965, spent ten weeks in Billboard’s Hot 100 and nineteen weeks on the Adult Contemporary Chart, reaching #2 in March 1966.

HERB ALPERT: The reaction to Call Me was pretty darn good, right from the start.

HERB ALPERT: He has a very distinct voice. A lot of people, when they first heard the Call Me record, they didn’t know if he was man, woman or beast. (laughing)

CHRIS MONTEZ: When they realized it was me, they couldn’t believe it. And they started playing my stuff. They loved the new transition. And here, it’s in the middle of Beatlemania, because in ’66, that was where it was happening. And it’s funny, I was probably one of the few artists that got on the charts even with all this rock ’n’ roll and British music going on in America.

HERB ALPERT: This was a completely different Chris Montez than the record he had a hit with years back, but I think that was a good part of it. People were willing to play it based on the merit of its strength. It was a good record. It had those elements that made it sound really good on the radio.

CHRIS MONTEZ: And all of a sudden, I’m involved with doing these standards. You know like Fly Me to the Moon, The Shadow of Your Smile. And all of a sudden, I forgot about my rock ’n’ roll, because when I went on the road again, these are the songs I was singing. I never sang Let’s Dance or Some Kinda Fun, or any of those ballads again. I didn’t want to. Yeah, I guess it was becoming a lounge sound, for lounge lizards. It was becoming this kind of sexy music. I got a lot of mail from people saying, “Oh, I met my girlfriend singing that song, and I got married this and that.” So it became a whole different format for me. 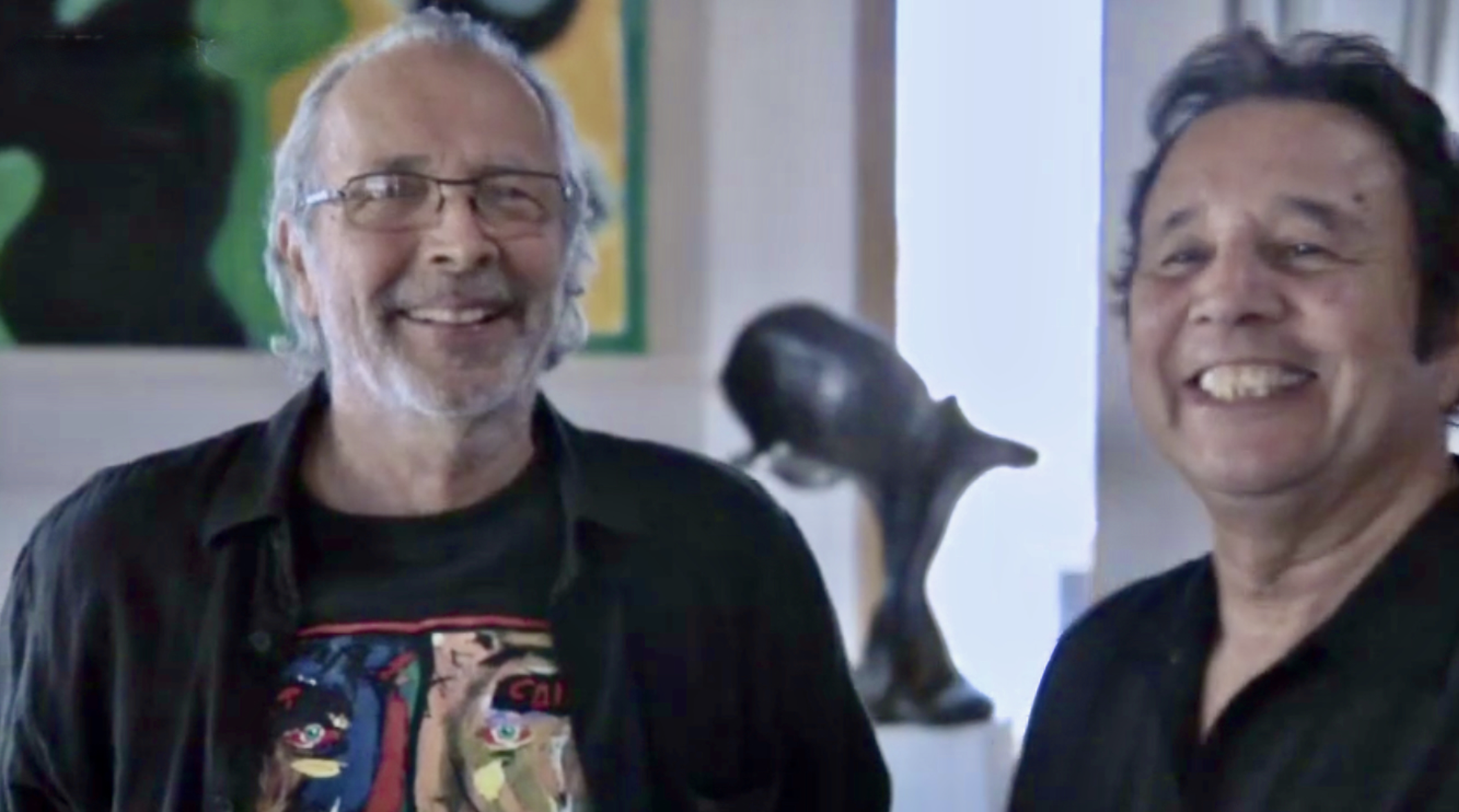 HERB ALPERT: Like I say, he’s very musical and he’s very adaptable, and it was one of those things that really worked out well. Because even to this day, when I hear that record, it works. A good song is a good song. But it was the performance, the song, and the arrangement that really put it together.

CHRIS MONTEZ: I think everything happens for a reason, and I think it was meant for me to meet Herb. If it wasn’t for him, I wouldn’t have ever gotten to this genre of music which I love now. Herb Alpert was the best, he was he was hip, he was mellow, he knew what he wanted to do.

HERB ALPERT: The only great artists are honest artists, ones who can express themselves in an honest way. just the way it comes out. And to hear him sing, that’s the way it’s gonna sound. He didn’t affect that sound. That’s Chris’s sound. I think Chris has a niche for what he’s done and it’s beautiful. It’s his own thing, he didn’t copy anyone, and I think it’s beautiful. He should be very proud. I’m proud of him.

ANDREW LOOG OLDHAM: Chris is on the list of people who had not even a national anthem but had an international anthem. And if you’re dealing with aware people, you don’t get “Chris who?” It’s “Chris Montez, Let’s Dance.” And he was very lucky because he had it again when he was at A&M. Two international or national anthems with Call Me. That’s actually a career.

Both Chris Montez and Herb Alpert are on tour in 2022, performing music from all chapters of their extensive and influential careers.