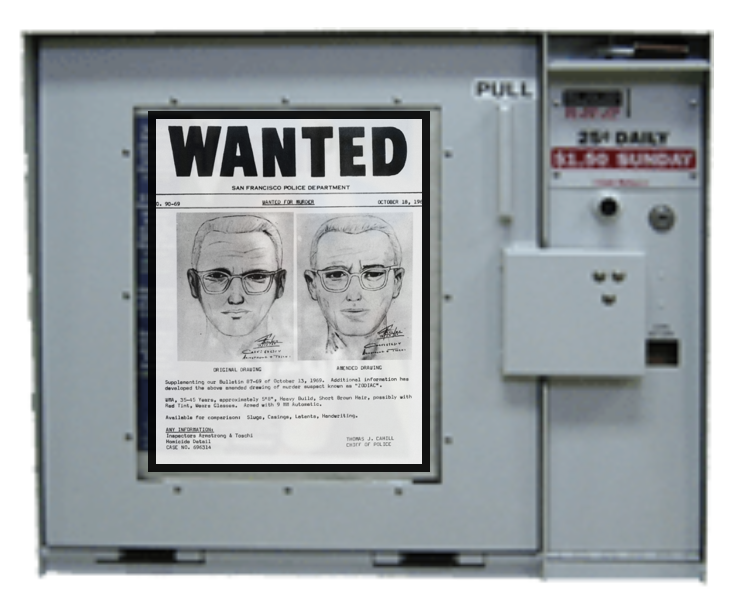 Like mute metal newsboys on a corner, newspaper racks are the slot machines of journalism. You put your money in and take your chances that there’s news you want to peruse.

Slot machines, and piggy banks. When you own a newspaper with racks you have little cash stashes all over town. Run short in the video store because the girls forgot to bring back the DVD for a week … Take some change out of the rack out front.

I pay for lots of things in quarters.

When we first bought the paper, I called down to the Rocky Mountain News and asked about buying one of their used racks. After we got the paper out one Thursday, I drove down to Denver to their warehouse.

A guy led me into a vast room where hundreds of Rocky racks sat in rows like blue Chinese terra cotta warriors.

“Look at the shit people do to these things,” he said, pointing to one that was riddled with bullet holes, next to another that looked like it had been ripped open with a giant can opener. “If your town will let you, fucking bolt them to the sidewalk. You’ll still have people who drive pickups into them and shit to knock ’em over, but it’ll stop the ones who cut the chain around the street sign.” 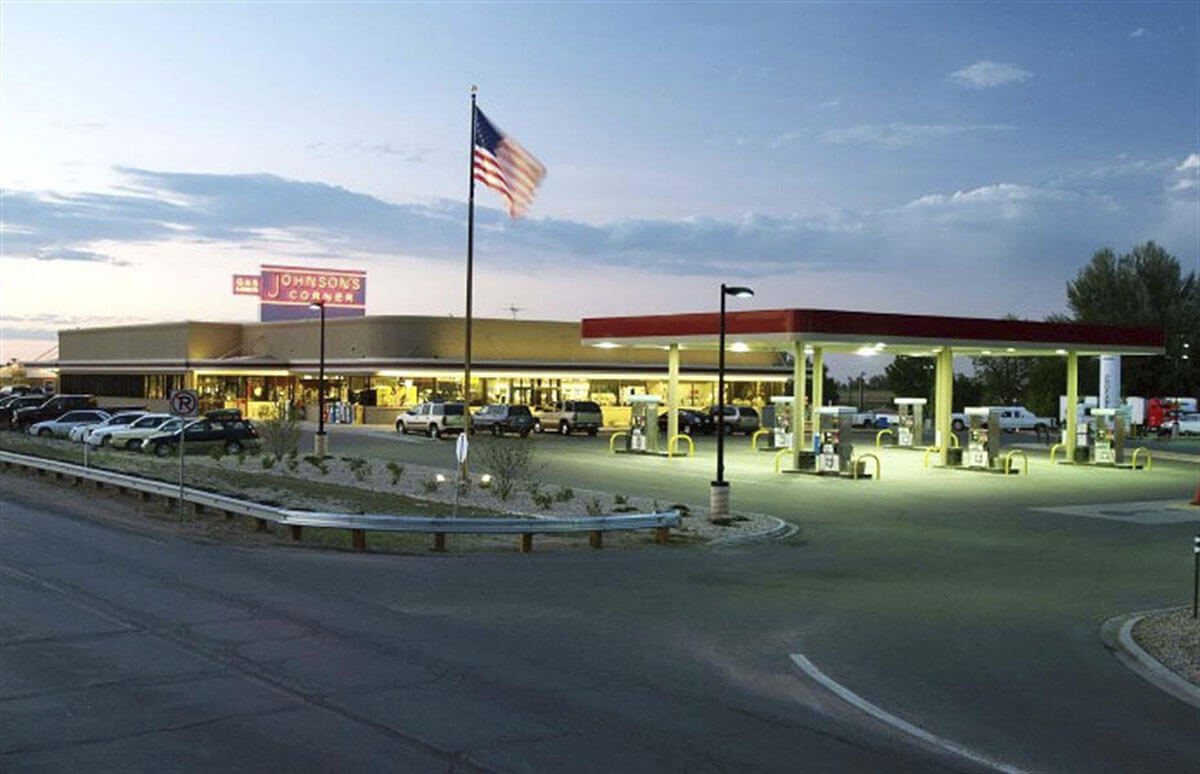 I put that original rack out at Johnson’s Corner, a world-famous (“try our cinnamon rolls”) truck stop that sits several miles west of downtown Johnstown along Interstate 25; a major north/south travel route across the country. About a year or so after we put it out there, the interior coin mechanism broke. You could now open the rack without putting money in. I was baffled how to fix it, and hesitated removing it lest I lose my position, so it became a de-facto test of the type of person people are: The kind who pulls the door before they put in the money, thinking they might get something for nothing, or the honest citizen consumer who puts in their money and then takes out your newsprint wisdom. My barometer of human honesty.

The scene at the interstate truck stop at early morning is an everyday scene. Truckers and other travelers pick up hitchhikers somewhere in the state in the middle of the night, and if they’re heading north along the Front Range, it’s likely they may stop at Johnson’s Corner. Perfect place to leave or be shed of someone for the next part of their journey.

The all-night truck stop restaurant crew usually takes pity and lets them nurse a meal, and three or four cups of coffee, through the night, but when the sun comes up, they start to run them off.

And that’s where I would find them: standing in front of the rack when I show up on Thursday morning to put in papers.

It used to be, right after the economic crash, it was older guys. Construction workers, oil workers, laborer-types who couldn’t find something else when the lay-offs came so they hit the road. Gruff and grungy, grumbling like old dogs with arthritis, I’d usually give them a ride to the next interstate exit, and my next stop. As we’d talk in front of the rack, me trying to scope out whether they were going stick a knife in my liver and steal my truck, I’d unload the quarters from the vending box. As we’d shake hands when they got out, I’d hand the quarters to them and wish them well.

One I didn’t give money or a ride to was the Zodiac Killer’s grandson. 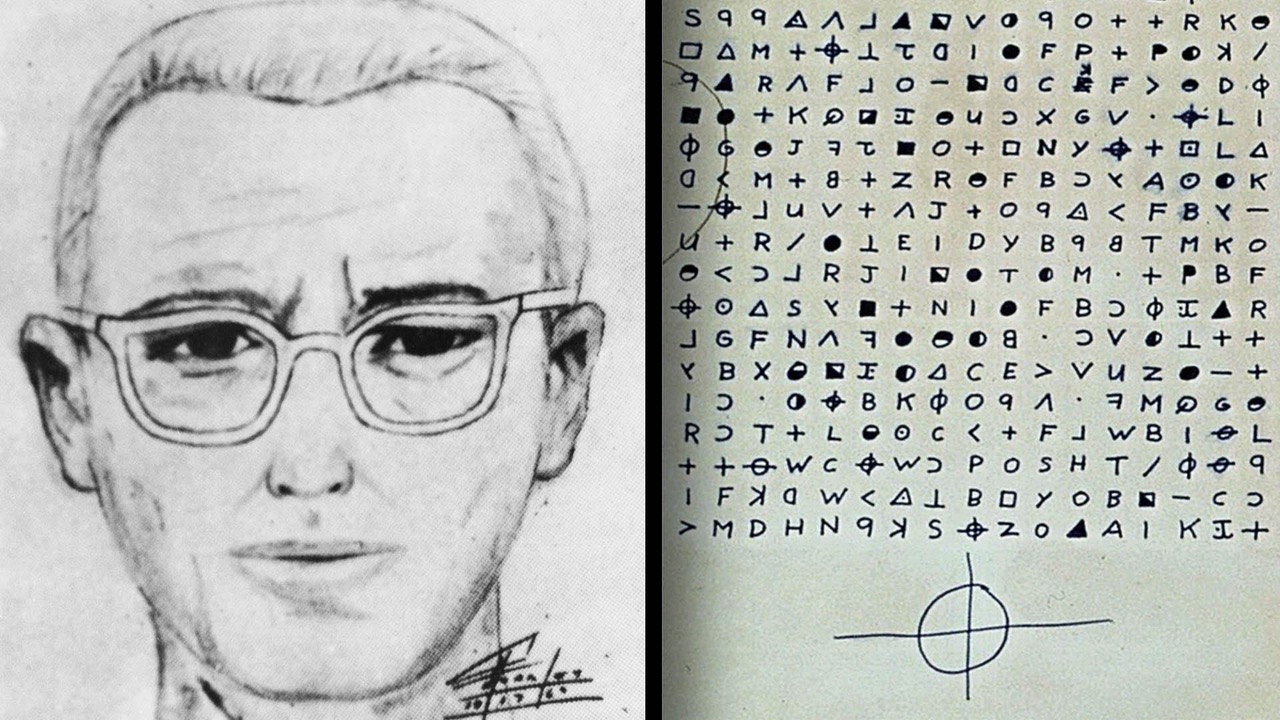 Here’s what I posted on the paper’s Facebook page after I got back to the office that morning … I was so jangled.

We’re not sure, but we think we met the Zodiac Killer, or his grandson, this morning when delivering papers to the rack at Johnson’s Corner.

He was standing next to it. Late 40s or early 50s maybe … Hair slicked back with the buttered toast he’d just eaten inside. Teeth browner than George Hamilton. 3-day growth. One-size-too-small leather jacket. Big Buddy Holly glasses. He started the conversation by admiring us for not being part of the “consumer culture” for driving a 26-year-old LandCruiser. This led to a diatribe against Apple, all delivered with flat, emotionless affect, punctuated by these harsh, barking laughs … Heh, Heh, Heh … all the while staring off at the horizon. He was so creepy we actually worried he might jump in as we started to pull away and tell us “to just drive.”

But this one particular summer it was young people. Literally teenagers. Runaways. Personally, I blame it on the fact that they are now teaching Into the Wild in English classes, setting another generation off on their own personal walk-about. If you haven’t read the book by Jon Krakauer, it’s about a young man named Chris McCandless who decides after graduating from college to go to the Alaskan wilderness, where he eventually starves to death. 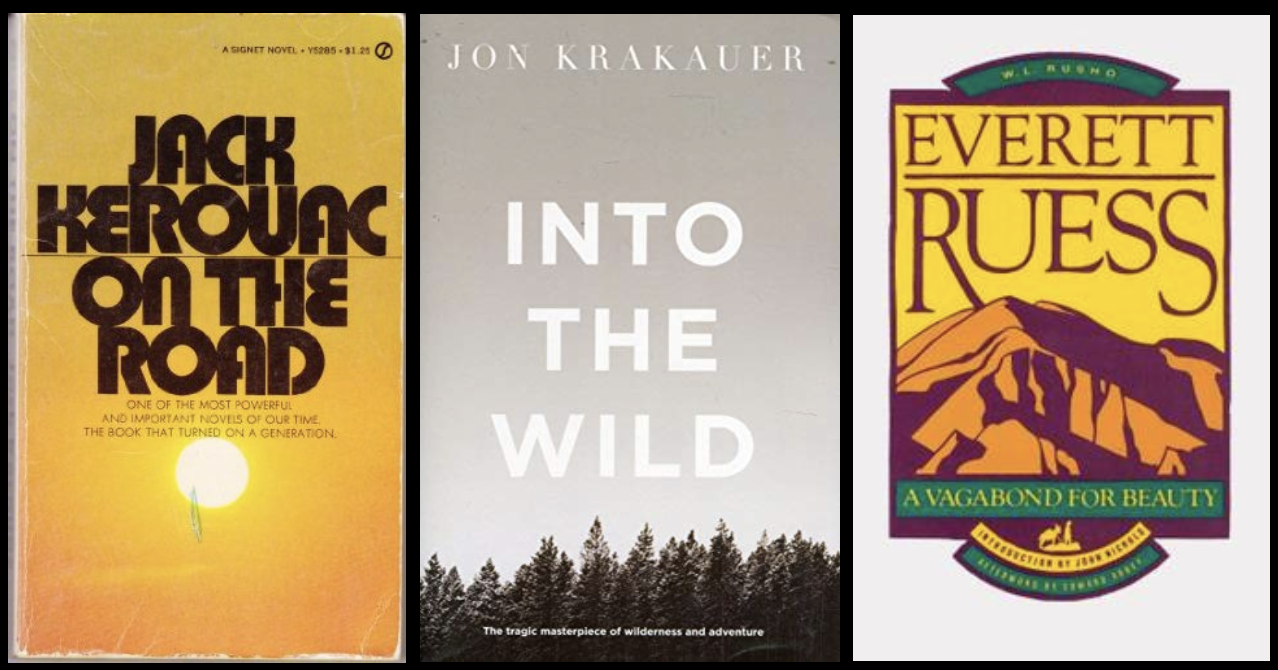 But in reality it goes far back beyond that, and even your grandfather’s beatnik, Jack Kerouac, to Everett Ruess. Born in 1914, Ruess could have very well been McCandless’ grandfather. At age twenty-one, he went alone into the Utah desert with just his supplies and a burro and disappeared, never to be seen or found again. 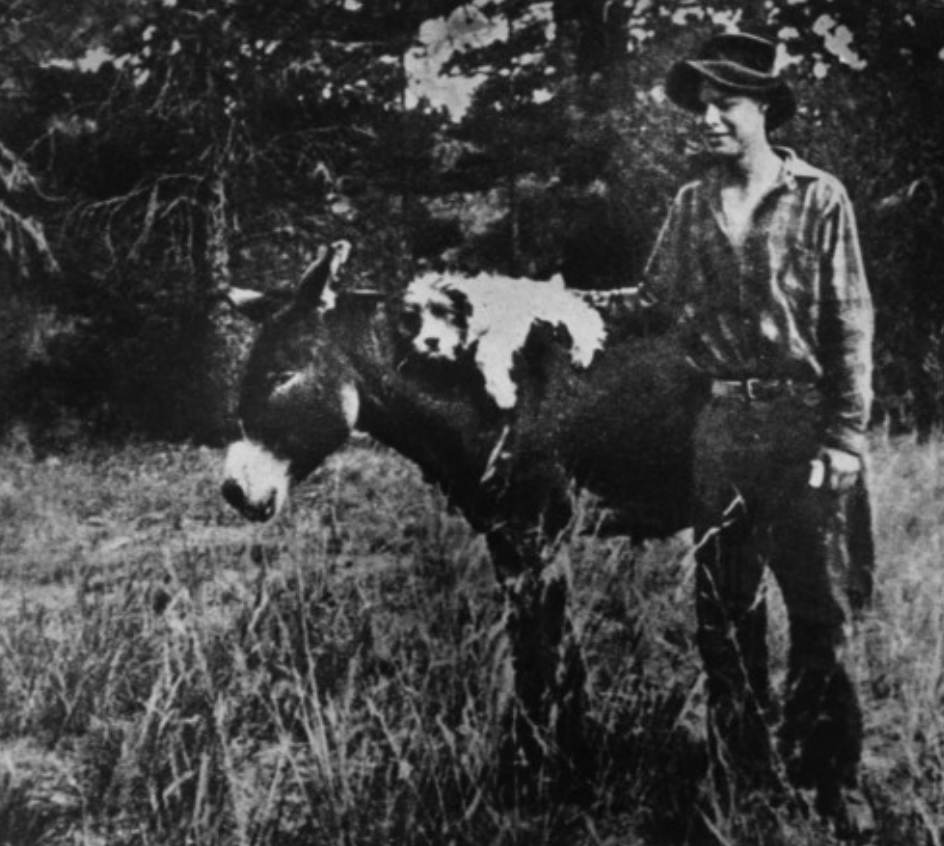 In Everett Ruess: A Vagabond for Beauty, author W.L Rusho writes, “Like Everett, we all yearn to cut ourselves off from the comforts and securities of a drab existence at some point in our lives. We too feel a need to enter our own small wilderness in that difficult search for a unique destiny…”

One morning there were three of them out in front of the rack, lying against the wall rummaging through their backpacks as they tried to scope out their next ride.

One of them, a small blond kid, said he was from Maine on his way to Los Angeles. The other pair, a girl with a guy who was obviously her boyfriend, initiated the conversation after I broke the ice by saying “hey” and looking at them as I started to load the rack.

We talked a bit. The couple was from Florida they said … One of the things I learned that summer was to just go with their story. Admire it for its creativity and not bug on the fact that more than likely, they are lying right to your face … The girl looked about nineteen. A tangled mass of black and bright blue hair hung in her eyes. The guy had dreadlocks down to the middle of his back. Momentarily, I felt sorry for the blond kid, imagining what he must have to think of to try and distract his mind when the girl and guy are going at it late at night in the next stall of whatever rest stop they find to sleep in for the night.

“Can you give us a ride, mister?” the girl said.

For some reason I wasn’t into getting any more involved in this teenage Peyton Place.

“I’m only going a couple of miles up the road,” I said. “The next exit isn’t the best place to pick up a ride that’s going to take you anywhere of distance. You’re probably better off hanging here and trying to catch a ride with someone else.

”  Mr. Dreadlocks, obviously uneasy about not being the alpha male in this scenario anymore, quickly agreed.

“I just want the fuck out of here,” the girl whined.

“Really,” I said with the same smile I’d give one of my daughters, “I think you’re better off here.” I walked over and handed the girl the change from the rack. They thanked me and scurried back into the truck stop. I finished filling the rack with papers. As I was leaving, they came outside with a handful of food and drinks and started scanning the parking lot.

Then there was Tyler.

Tall, taller than me, with short blond hair under a baseball cap, Tyler saw me walking toward the rack and shuffled off across the parking lot.

“Hey,” I barked. He turned around. “Where are you going?”

I motioned him over to the rack. 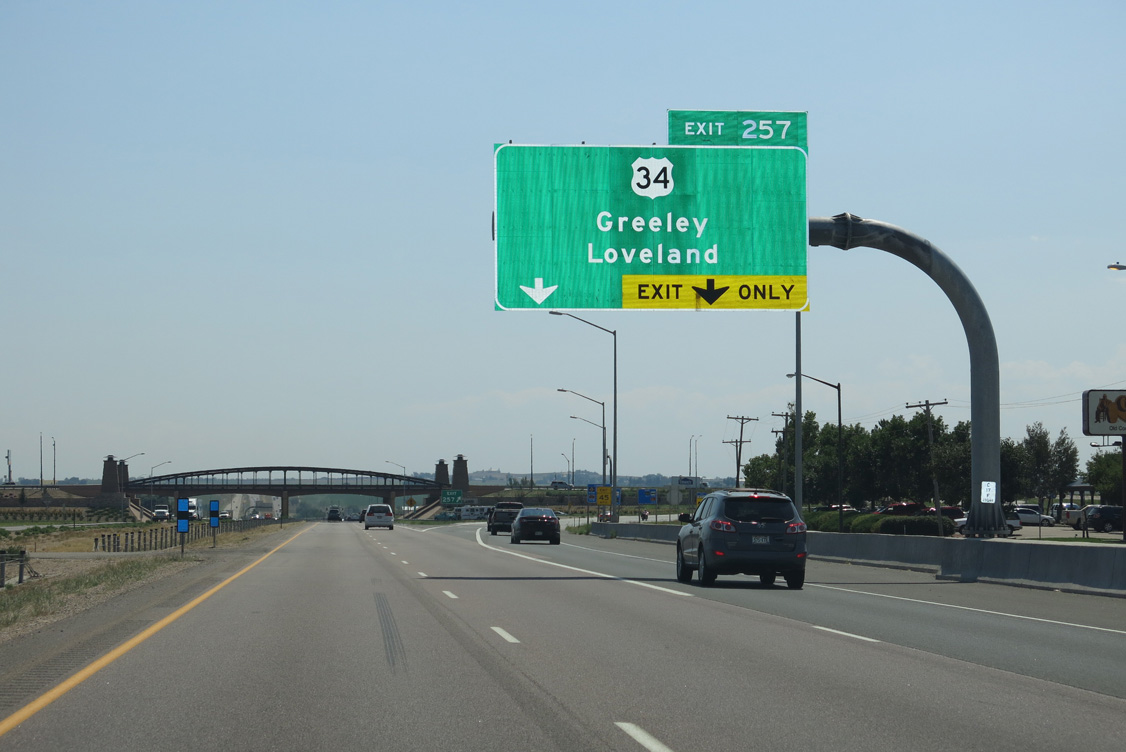 “I’m going up the road about three miles,” I said. “At the next interchange you’ll have I-25 going north and south and Highway 34 going east and west pretty much through the state. You want a ride?”

Tyler tossed his backpack in the back of the LandCruiser with the papers and climbed in. He said he had been on the road for a bit. He had started out in his Toyota pickup, which he spoke of lovingly and like a gearhead, but it blew up in Idaho and he’d just sort of kept going. He’d picked up a ride in the mountains of Colorado and they’d left him off here at the truck stop.

We pulled up to my next stop. He climbed out. I handed him the handful of change from my jacket pocket. I also pulled out a business card.

“What’s on that side?” Tyler said.

“There would be girls there?” he said with a grin. 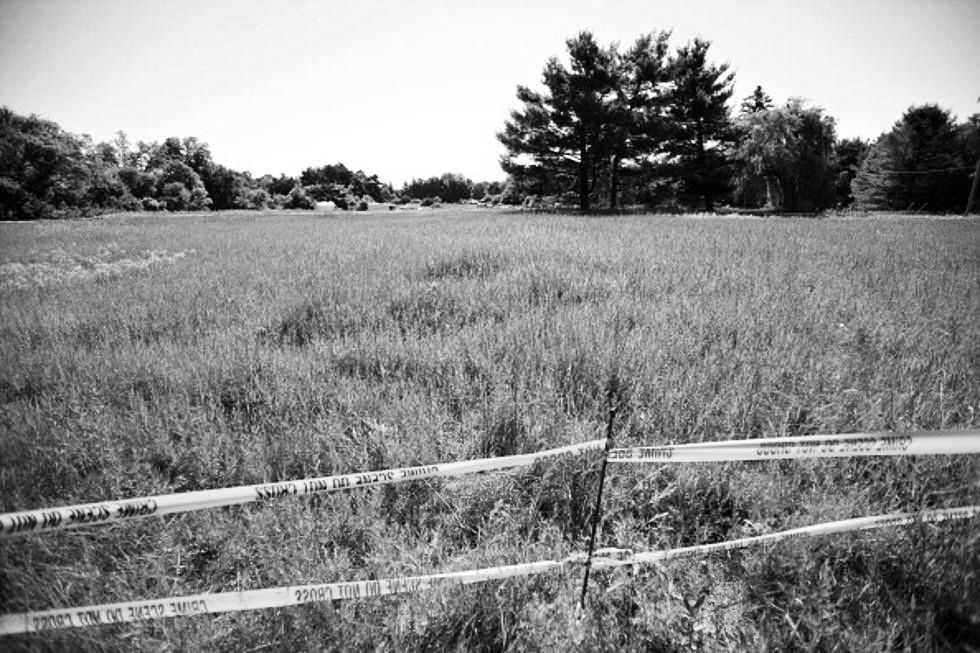 I told Lesli when I got back to the newsroom about meeting Tyler. She smiled and suggested that when I give them the change I need to tell them that they needed to call home with part of it. They didn’t have to say where they were, if they didn’t want to, but they needed people to know they were alive. She also joked that Tyler was going to wind up in a field, dead, with no ID and just a business card with my name and a bunch of quarters in his pockets with my fingerprints on them. I said that well at least I would be able to tell them that he said his name was Tyler and that he lived in Montana.

Tyler and I shook hands. I told him to be careful. As I walked into the store with my papers I looked back at him. He had shouldered his pack and was already scrambling up the grass berm hill on the other side of the road. He had not looked back.

MATT LUBICH is the co-owner, with his wife Lesli Bangert, of the weekly newspaper The Johnstown Breeze that has been printing since 1904. This piece is an excerpt of his work-in-progress memoir, Hometown News. You can contact him at mlubich@johnstownbreeze.com.