HALF A CENTURY OF EXILE ON MAIN STREET 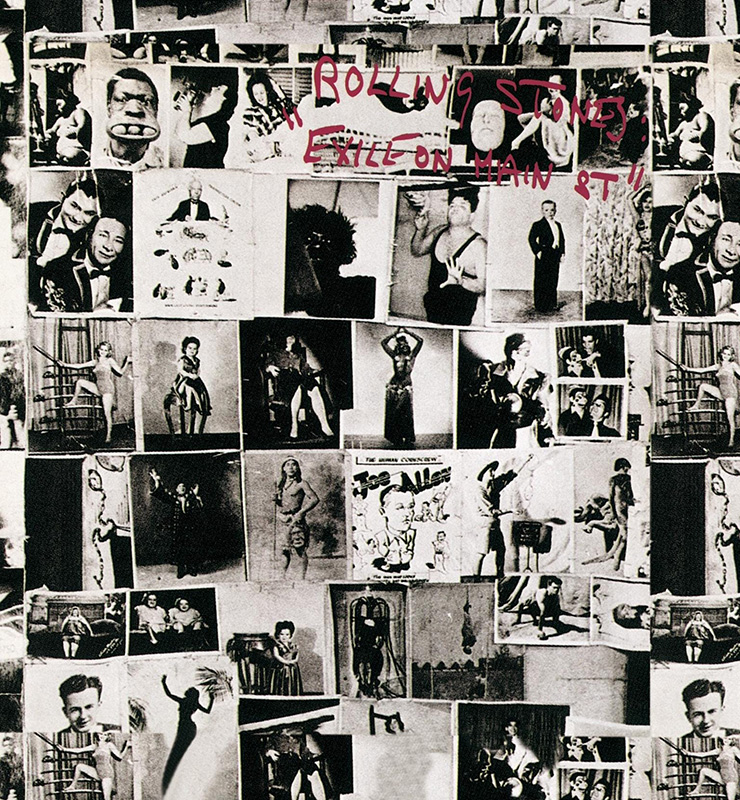 The classic album made in exile takes an inevitable journey to Main Street where it remains relevant fifty years on.

Garage rock experienced a revival around the turn of the 21st century.

Interpretation of what constitutes “garage rock” is as varied as the bands classified under the umbrella of the genre’s largely ambiguous label. Suffice it to say, lovers of garage rock have an affinity for music that is unpolished, unpretentious, and above all, raucously honest.

This particular category of rock is not about polish or shine, instead, it roars wild in its inelegance, its aim to conjure sounds which, at least on the surface, exhibit an overall lack of typical industry standard glossy production quality.

In the ’60s, bands like The Kingsmen, the Troggs, and even The Guess Who were considered garage rock and, fittingly, those bands started in actual garages. Mom and Dad left the family station wagon in the driveway to make room for drum sets and amplifiers, and unfiltered sound emerged, defiantly strong and decidedly raw.

Four decades later, in the early 21st century, a husband and wife duo from Detroit known as The White Stripes would not only resuscitate the all but dead genre, they’d lead a charge of bands hellbent on recapturing this organic, primitive sound that once dominated the airwaves in the early days of rock and roll.

As is often the case, what once is old, becomes new again.

Arguably, the most famous rock band in music history, The Rolling Stones, would not be considered by most listeners or critics to fall under the garage rock genre, and technically, they were usually quite far from it.

However, in 1971, when the band gathered together in a rented villa in the south of France, they recorded what some consider the greatest rock album of all time, perfect in its imperfection, in other words: they made a garage rock album. The only difference being that their working garage was actually an unfinished, damp, surprisingly dingy basement in an otherwise palatial French coastal mansion.

Mick, Keith, and company actually began recording the songs that would eventually become Exile On Main Street back in 1969, a full two years before the infamous debauched summer at Nellcôte, back when they were still in England, and before they would live abroad as tax exiles — a band against the world, as they very much felt it had become an “us versus them” scenario in which they were working.

This was, after all, why they were posted up in Keith Richards’ rented villa in the south of France. Due to financial mismanagement, they owed the British government a veritable shitload of money they simply didn’t have, and their income was about to be subject to taxation at an outlandish 93% rate. When this knowledge came to light, and before the government could seize all of their assets, they reluctantly yet willingly decided to get the fuck out of Dodge, so to speak, leaving England for what would become an extended, wanton holiday in France.

Jagger and his wife Bianca settled in Paris, while Keith, his wife, and his son established residence in Villefranche-sur-Mer, near Nice, in a 16-room mansion known as Villa Nellcôte which, rather unfortunately, counted among its previous tenants German forces during the Nazi occupation of France in the early 1940s. Despite this cringeworthy history, the opulent mansion offered two things that attracted the band and their entourage of friends — total seclusion and lots of room to party.

However, one thing the palatial estate — and the surrounding areas in France — lacked was a suitable space for recording. That was, of course, until they discovered the château’s catacomb-like basement. The working conditions down below were far from ideal — the unfinished cellar was cold, damp, and surroundings considered, surprisingly dingy, but the natural reverb and the acoustics were sublime.

A mobile recording truck was brought in, parked in the driveway, and cables were expertly snaked downstairs for microphones, amplifiers, and even a closed-circuit black and white camera allowing engineer Andy Johns to remotely monitor the band’s progress during sessions, or as was often the case, the lack thereof. Band members would set up in their own little corridors, branched off the main basement area, for whatever separation that offered. At that point, they were quite literally working with what they had and taking what they could get.

Because this was Keith Richards’ house, the drugs flowed as freely as the running waters of the Ligurian Sea adjacent to the property, and during this time, Richards developed quite the heroin habit, spending thousands of pounds per month on smack.

Maybe this was, at least in part, how the album came about its loose and rugged feel, which is to say, honestly. At times, many of the tracks come across a bit pastiche, but always stop short of careless or sloppy. They may have been high as fuck, but they were professionals after all was said and done. Thanks to Jagger and Richards skillful collaboration during final production, things would tighten up, musically speaking, in the end, making Exile one of the tightest records the Stones recorded — an amazing feat considering how royally fucked up everyone was most of the time.

Alcohol, marijuana, cocaine, and heroin were mainstay items on the menu at Nellcôte that summer, and the cast of characters that floated in, out, and about were a motley group to say the least.

Gram Parsons was a close friend of Keith’s and his stay at the villa was the longest of anyone who wasn’t in the band or crew, but he’d eventually be asked to leave — supposedly by Jagger — because of the negative effect his presence had on Keith’s sobriety and productivity. Other notably famous faces that floated through included William S. Burroughs and John Lennon.

In fact, so many friends, acquaintances, and hangers-on passed through the mansion’s opulent iron gates that it wasn’t uncommon to have a couple dozen people or more show up for lunch and not leave for days.

However, this also meant that, despite the privacy offered by the magnificent estate’s seclusion, no one gathered in the main room even noticed the burglary occurring in the next room over one night. Thieves broke in and stole a number of Richard’s guitars — eleven to be exact — and the crime was believed to be connected to some of the drug dealers who earlier had scoped out the disorderly and debauched atmosphere, and realized they could easily walk out with thousands of dollars of instruments without anyone noticing until it was too late.

Years later in an interview when asked about the incident, Richards said that all the guitars were later recovered when they turned up on the market, and intimated that the thieves responsible had been dealt with accordingly, slyly adding, “I mean, they’re still alive, but…”

Eventually, Richards was forced to leave Nellcôte — and the country of France — when a high court convicted him of trafficking in cannabis. He was given a one-year suspended sentence, a moderate fine, and was banned from re-entering the country for a minimum period of two years. Although Richards only lived at Nellcôte until August 1971, the French government forced him to maintain the rent on the property for the entirety of the two years he was banned from living there.

Despite the circus unfolding around them, the lads had an album to finish, as well as a tour to begin, if for no other reason, than a pressing financial one.

Mick and Keith’s next stop would be America.

The unfinished tracks recorded during the band’s time in France were taken to Sunset Sound in Los Angeles, where extensive vocal and guitar overdubs were done during the first quarter of 1972. It was here that Billy Preston and Dr. John would come in to lend their hand — no pun intended — adding soulful piano and organ arrangements during the sessions.

As production on the album was nearing a close, Jagger turned his attention to the album’s packaging. It’s been written that he wanted a cover that portrayed the band as “runaway outlaws using the blues as its weapon against the world.”

Mick and Keith hired Robert Frank, a photographer whose work they admired, to shoot images for the album cover. Frank took Jagger to downtown L.A. to photograph him in and among the gritty streets which are now known as Skid Row.

It was there on that day that the album which, up to this time, was simply titled, Exile, would finally become Exile on Main Street.

The photos taken that day were used in the gatefold and on the back covers, but images Frank had taken more than a decade earlier of circus freaks in a small town on Route 66, were the ones they ended up using for the now famous album cover.

At long last, Exile on Main Street would be released on May 26, 1972, and would become an instant commercial success, though the sprawling double album would not receive immediate widespread critical acclaim. Many critics noted the “uneven and inconsistent quality” of the album, and Lenny Kaye wrote that the songs had a “pervading feeling of blackness.” Considering it was recorded during a dark, drug-fueled haze, that description tracks.

Other critics, like Geoffrey Cannon of The Guardian, wrote that, “Exile On Main Street will go down as the Stones’ classic album, made at the height of their musical powers and self-confidence.”

By the late ’70s, critics previously unfavorable toward the album would reexamine their initial impressions, and many began referring to it as the “greatest rock and roll record of all time,” which even Jagger himself would later disagree with.

Contrary to popular opinion, I must agree with Jagger — I don’t think Exile On Main Street is the greatest rock and roll album of all time. I don’t even think it’s the best Rolling Stones album — that noble designation would either go to Let It Bleed or to Sticky Fingers, but it’s really damn good — and certainly in the Stones’ top three.

Fifty years on, Exile On Main Street holds steady as one of the finest rock albums of all time, but it doesn’t need to be the best. It never did.

It does a fine job of perfectly capturing a moment in rock and roll history and faithfully retelling a legendary narrative across the cacophonous 18 tracks that comprise one of the best albums in the entirety of the Stones’ catalog which, remarkably, now spans nearly six insanity-packed, drug-filled, musically triumphant decades.

As it turns out, time really is on their side.