Gene Krupa is easily one of the most influential musicians of the 20th century, elevating the role of the jazz drummer from sideman to soloist to superstar. His energetic playing on Benny Goodman’s “Sing, Sing, Sing” remains a standard-bearer 80+ years later, and The Drum Battle he recorded with Buddy Rich in 1952 is as dizzying today as it was upon release.

But Krupa’s towering influence has not been confined to jazz and swing drummers. In fact, you might be surprised to learn that he was a major inspiration for some of punk rock’s most important timekeepers, including Jerry Nolan of the New York Dolls and Johnny Thunders and the Heartbreakers, Rat Scabies of the Damned, and Lucky Lehrer of Circle Jerks. 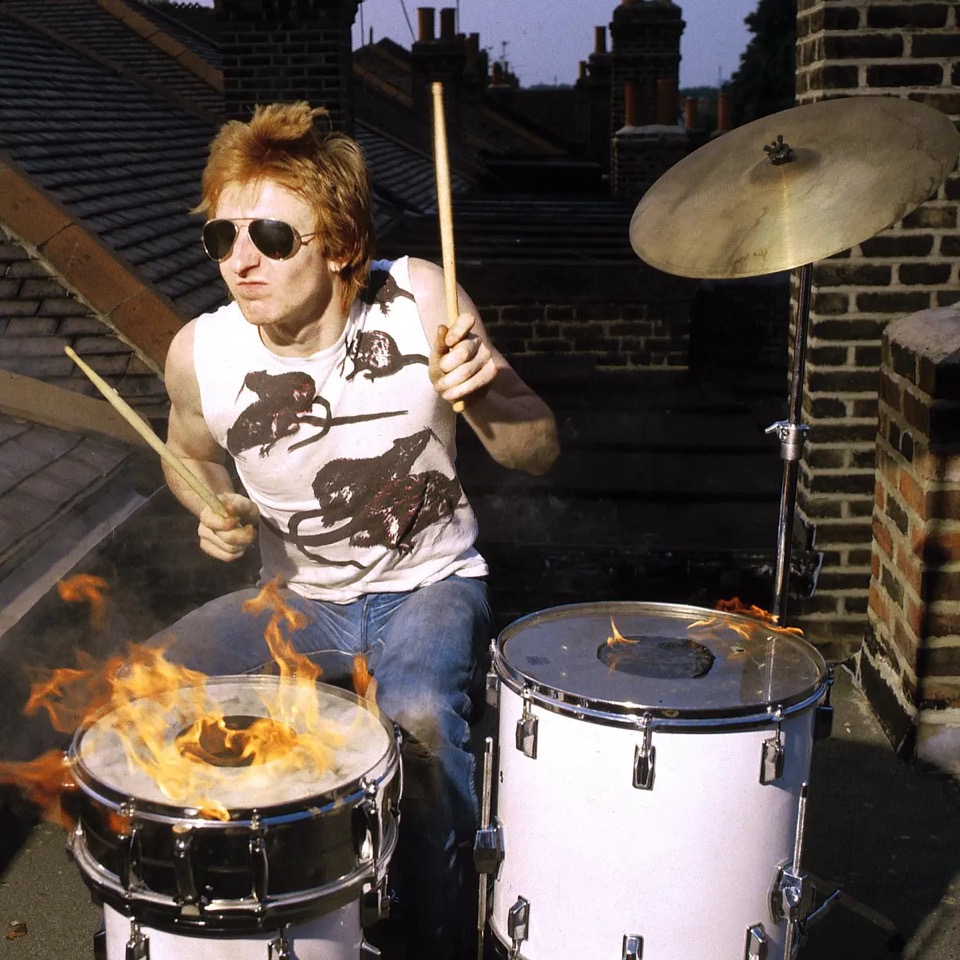 “There was a lot of jazz when I was a kid and, as I never tire of saying, jazz is great because there’s a drum solo in every song. So, there was always something for me to look forward to. I had a great big band album with Gene Krupa on it, and some Glen Miller stuff. Anything that was overly percussive, that’s what I wanted,” Scabies told me in an interview for my new book, Forbidden Beat: Perspectives on Punk Drumming (Rare Bird).

“The thing about Krupa was he was attainable. You could hear what Krupa did and it was musical, it made sense. As opposed to his archrival, Buddy Rich, who was just terrifying,” Scabies said. “With Krupa, you can just listen. Same thing with Sandy Nelson, it’s that ability to bring melody out of the drum kit.”

The Damned were the first British punk band to release a single (“New Rose”), the first to release an album (Damned, Damned, Damned) and the first of their peers to tour the U.S., where Scabies’ sped up tempos are often credited for propelling the budding hardcore punk movement. And when it comes to groundbreaking drumming style, there’s no doubt that the pounding toms that open “New Rose” are as iconic to generations of punk fans as Krupa’s opening tom work on “Sing, Sing, Sing” is for jazz fans across the decades.

“For (Krupa), it was all about playing with the band and supporting what’s going on around you. When you get those four bars, twirl your sticks, and make it look fucking great, show off as much as you can, and then go back to playing the song,” Scabies said. “Krupa single-handedly made it seem like the drummer held the whole band together.” 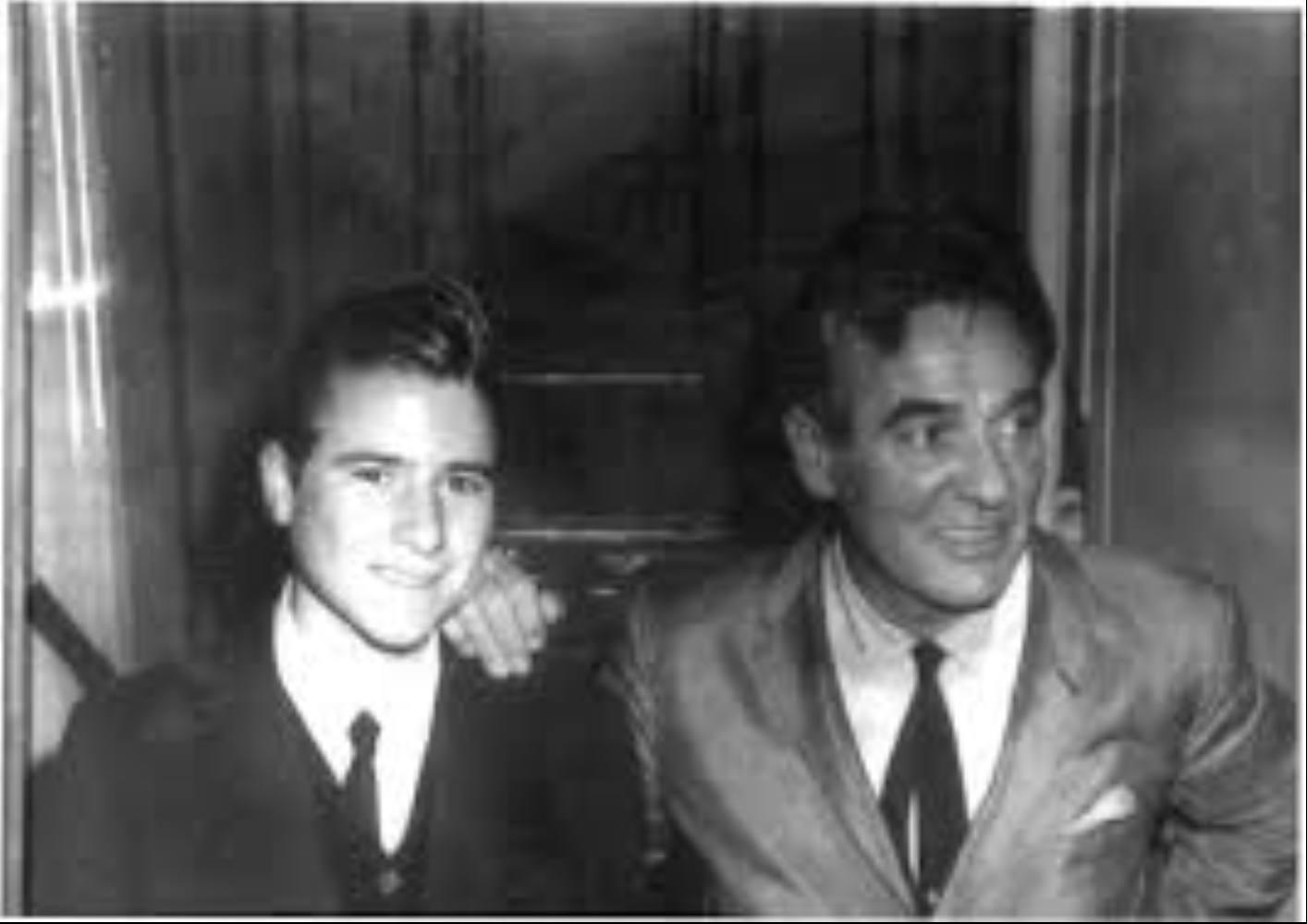 Scabies certainly wasn’t alone among early punk drummers in his adoration for Krupa. In fact, one of punk’s earliest star beat-keepers, Jerry Nolan, was a self-professed acolyte of Krupa’s drumming and style from an early age.

“Unlike many popular drummers of the day (the Who’s Keith Moon, Yes and King Crimson’s Bill Bruford, Led Zeppelin’s John Bonham, Emerson, Lake & Palmer’s Carl Palmer, the Mahavishnu Orchestra’s Billy Cobham), there were no gongs, second bass drum, tympanis, upside-down China cymbals, or multiple racks of tom-toms in his setup. To Jerry, if it was good enough for his idol, swing-era drummer Gene Krupa, it was good enough for him.” 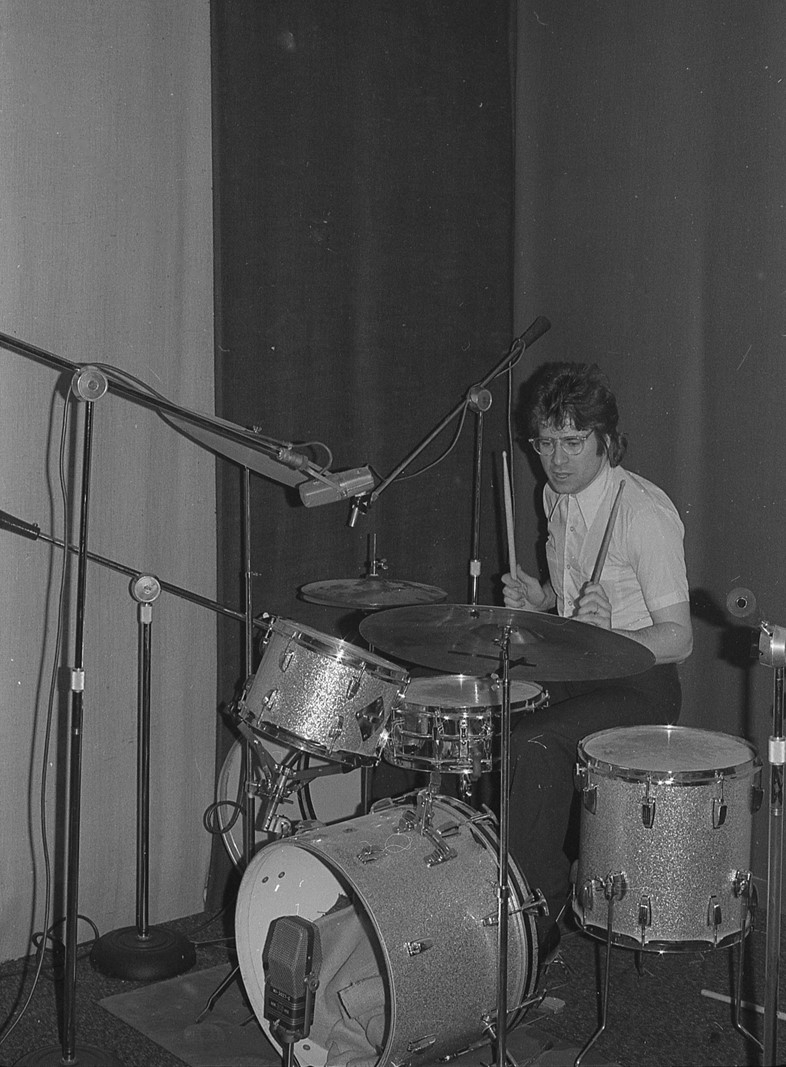 Although Nolan only played on four studio albums during his storied career—three with the Dolls, one with the Heartbreakers—Krupa’s influence is evident throughout his blistering performances. Weiss points to the song “Trash” from the Dolls’ self-titled debut, and “Baby Talk” from the Heartbreakers’ L.A.M.F. for the most obvious examples of Krupa’s influence, suggesting that this is where Nolan first injected Krupa’s stylistic approach into punk, which in turn gets echoed throughout the decades.

“First-wave punk groups, including Blondie, the Ramones, the Clash, the Damned, and Sex Pistols, all played on bills with bands Jerry drummed for. All of them contained unapologetic Dolls and Heartbreakers fans,” Weiss writes. “Despite their own multitudes of drumming influences, Blondie’s ‘Kung Fu Girls,’ the Pistols’ ‘Problems,’ the Clash’s ‘Janie Jones,’ and the Damned’s ‘New Rose’ all contain characteristics of Jerry Nolan in how their drummers approached these songs. They’re concise and driving, contain few frills, are awash with sustained crashing cymbals, are filled with dynamics, and have controlled but limited embellishments. The dictum apparent throughout is ‘Don’t overplay. Compliment.’” 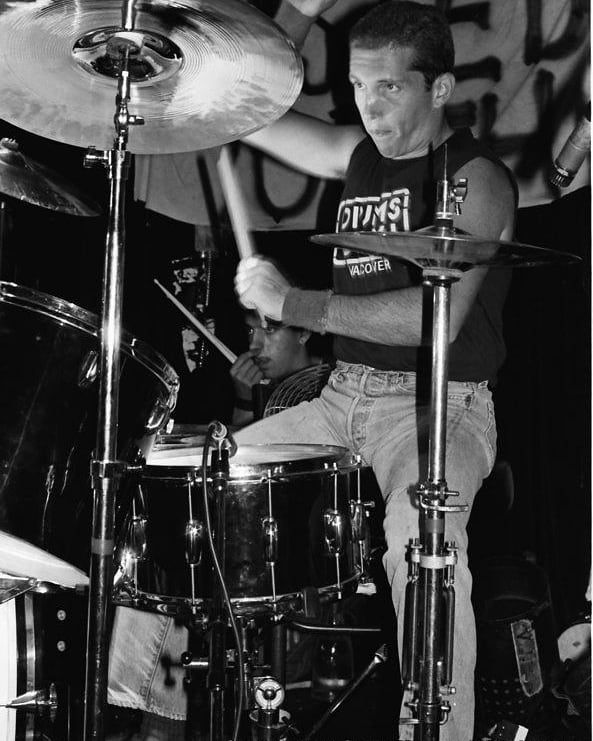 Over the years, Krupa’s influence continues to be acknowledged by punk drumming greats like Lucky Lehrer, a jazz-trained hardcore drummer who first made his mark with Circle Jerks. “I agree with Rat that among early jazz drummers, Gene Krupa was totally amazing, and Buddy Rich was absolutely terrifying,” Lehrer writes in the foreword to Forbidden Beat. “No two drummers play the same, and that is the best part of it.”

So, the next time you listen to your favorite punk albums, raise a toast to Gene Krupa for inspiring generations of drummers to take new risks while always playing in service of the song—whether or not they’re aware of the important influence this jazz drumming great had on their favorite music.

“I would say Krupa was always the bigger influence on punk drummers. Which is why I think punk sustained so long, it’s the simplicity. If it’s too difficult or too technical, you just get disheartened as a beginner,” Scabies said. “That inspires people to keep going and go on to bigger and better things eventually.”