©2022 By Andrew Wendler (formerly of the Necros)

By the time the Alice Cooper group hit Toledo in December of 1973, it was clear that change was in the air. Muscle of Love, the bands latest LP, was struggling to attain the same level of success as their previous two efforts, School’s Out and Billion Dollar Babies, and the band was beginning to succumb to the standard laundry list of rock star afflictions: booze, drugs, egos, money, groupies, and the strain of perpetual touring. Though the band had honed its craft grinding out the jams in its home base of Detroit and the faceless rust-belt communities in its orbit, the idea of spending December on a tightly-scheduled run through the great lakes region–with a few key southern dates thrown in for good measure–was less than appealing.

Initially, Toledo wasn’t even a stop on the itinerary. Somewhere along the line booking agent Jonny Podell realized the band had a night off after its gig at Crisler Arena in Ann Arbor, Michigan, and figured a quick stop in Toledo would be an easy way monetize an otherwise off-day of the tour.

Already frustrated by growing tensions within the band, the group was less than excited about their arrival in Toledo. Later, tour manager David Libert would be quoted saying, “If the Lord ever wanted to give the world an enema, this is where he would stick the goddamn nozzle.”

While accounts of the ensuing incident vary, everyone agrees on this: The Toledo crowd was geared and primed for violence right from the start. From the first note of the band’s opening number, “Hello, Hooray,” the crowd began pelting the band with anything withing reach. The deluge continued as the band performed “Billion Dollar Babies,” and an explosive, most likely an M-80 or cherry bomb, was thrown on stage injuring roadie Larry Hitchcock. Confusion ensued, and the band left the stage eventually retreating to the Holiday Inn located across the river. Ashley Pandel, Cooper’s publicist is quoted in the January 31, 1974 issue of Rolling Stone saying, “Alice felt if they continued, there could be another Altamont.” The crowd reportedly dispersed after an hour or two of typically rowdy behavior while waiting in vain for the band to return to the stage.

At that point, the story goes in two directions. While the Cooper camp maintains that guitarist Michael Bruce was injured to the point of almost losing his sight in one eye, journalist Bob Greene has an entirely different take on the situation. Embedded with the group for the entirety of the “Holiday Tour ’73,” Greene states in his excellent and long out of print book, Billion Dollar Baby, that Bruce was in fact unharmed, and the news of Bruce being transported to a Hospital in Detroit was fabricated simply as a cover for the band’s refusal to return to the stage. Greene states the band retreated to the hotel, and by the time the decision was made to not return to the stage Alice was sharing stories and Budweiser’s with some uniformed Toledo police officers. By the time the entourage was preparing to leave the hotel in the morning, a story in The Blade, Toledo’s long-standing news daily, reported the story just as Cooper’s publicist as dictated. Meanwhile, Greene states that Bruce entered the lobby in the morning and began joking about the incident with his bandmates and crew. He continues that while they were preparing to leave, he witnessed members of Cooper’s entourage call Tom Davis at The Blade, and, perpetuating the alleged deception, “confirm” that Bruce was in fact in Detroit. The next night, the group performed in front of 17,000 people in Toronto.

Well into the 1980s, Cooper would cite Toledo as his least favorite city when questioned, although his animosity had faded by the time he returned to the city in 1986 on a double bill with Ted Nugent. In a bizarre turn of events, famously enthusiastic Toledo Mayor Carty Finkbeiner would in 1996 declare an official, “Alice Cooper Day.”

In the forty some-odd years since the publication of Billion Dollar Baby, Greene has come under scrutiny and suffered numerous unrelated accusations; Cooper and the rest of the involved parties continue to give the book little credence.

Fun Fact #1: The Blade gave Greene and Cooper over five columns of space in it’s Sunday, December 23, edition. Tom Davies, who socialized with Cooper backstage before the performance, weighs in on the then novel practice of a journalist embedding himself with a rock group (Greene’s adventure predating Cameron Crowe’s Eagles story in Rolling Stone by two years) while Steve Harloff weighs in on the concert’s violence and the future of rock concerts in the city of Toledo. (As a side note, Harloff also awards the Rolling Stones the “Arthritic and Decrepitcy” award for their 1973 release Goats Head Soup. Keith Richards was 30 at the time. Harloff’s current status is unknown.)

Fun Fact #2: The original artwork for the Billion Dollar Babies Tour Poster–subsequently altered for the “Holiday Tour ’73” as seen in the Toledo Blade ad above–was created by Prairie Prince, drummer for the Tubes. Here’s a full color version below: 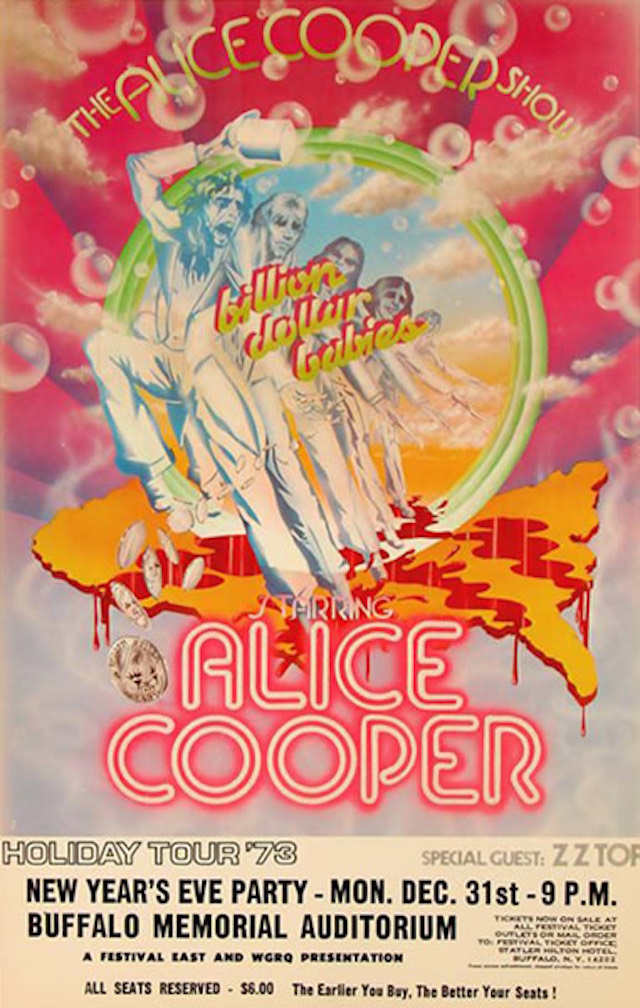 Max capacity of Toledo Sports Arena: 8,000; Capacity required if everyone who claims they attended this concert actually did: 150,000.

Update: Here’s The Coop some 35 years later being interviewed on Toledo’s local cable access show “Sports Rap.” Although part 1 of the interview is AWOL, no mention of the Toledo Incident is made during this segment.

©2022 By Andrew Wendler (formerly of the Necros)